Review of “Bad Apples” by The Headless Critic 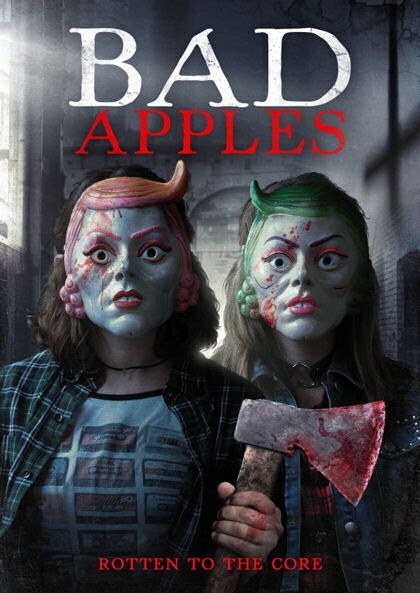 It’s Halloween night and a soon to be mother has turned off the porchlights to turn in early. Just as the lights go out, an intruder breaks in. The intruder brutally murders the pregnant mother who gives birth to twin girls as her dying act. Then her killer sits next to his victim, committing suicide beside her dead body. Those two baby girls would grow up to be Bad Apples. It’s time to go trick or treating.

After a thrilling and terrifying opening, the adolescent twin Bad Apples reach their breaking point when their school principle tries to take the masks they love to wear. Their terror isn’t contained within their high school walls. Today is their birthday and they’re going on a killing spree for All Hallows Eve. These Bad Apples are rotten to the core.

Sophomore feature director Bryan Coyne plays on a genre I love with a fun themed variation I really enjoy. He also commits some basic moviemaking mistakes that are hard to overlook. From an actress taking a bubblebath with fading bubbles that reveal her Hollywood body suit underneath to poor lighting, sketchy sound quality and a post movie ending that seems to be done more for runtime than entertainment.

Bad Apples isn’t all bad. I love the masked, slasher set-up. The twin killers are a lot of fun, being playful in their slasher roles. Coyne has a good time with his kills which is important for a slasher film. The movie sticks to practical effects, which leads to cutaway scenes but they’re still enjoyable. It’s not every day you get to see a cat lady have her pussy shoved down her throat. There’s so much potential, from the title to the cover to the concept. These apples are just too gritty and unrefined.