Review of “Inoperable” by The Headless Critic 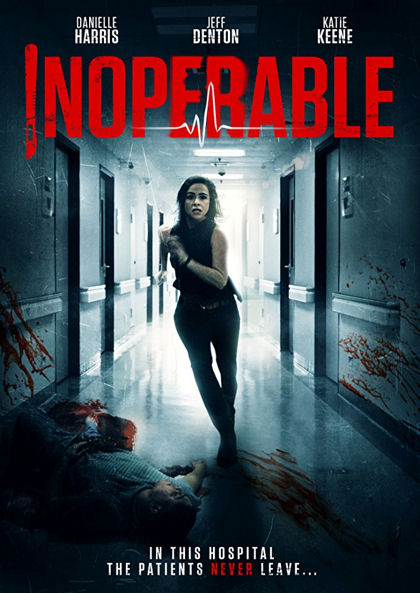 As the worst hurricane ever recorded hits the Florida coast, Amy Barret (Danielle Harris) finds herself trapped in a time loop, repeating the same few moments over and over. Each time the storm hits Amy awakes in a hospital sparse on patients but with a few crazy doctors and malevolent orderlies left over from the evacuation. Amy joins with two other trapped, time looper patients in Officer Ryan (Jeff Denton) and his con Jen Ardsen (Katie Keene). The trio realize they must find an escape from this Hell Hospital before the storm passes or be forever doomed to repeat the torture the hospital staff inflict upon them.

Inoperable is a repeating tale of hospital horrors. Final Girl Danielle Harris once again gets her spotlight to shine. This time it’s in a kickass yet confused role. This Inoperable tale does a nice job of keeping the viewer in suspense with an enjoyable outcome few will be able to predict. The final scene with the final girl (Danielle Harris) gave me chills of excitement.

Director Christopher Lawrence Chapman transfers the never ending Groundhog Day concept into his first horror tale where the characters get to be tortured over and over again. The sophomore director does hit a few lulls in his second feature outing, often feeling like we’re just watching Harris run down the same hospital hallways as repetitively as the concept of the film. Inoperable may not cure everything that ails the horror fan but it will disembowel and lobotomize them with some memorable horror scenes.