Review of “Primal Rage” by The Headless Critic 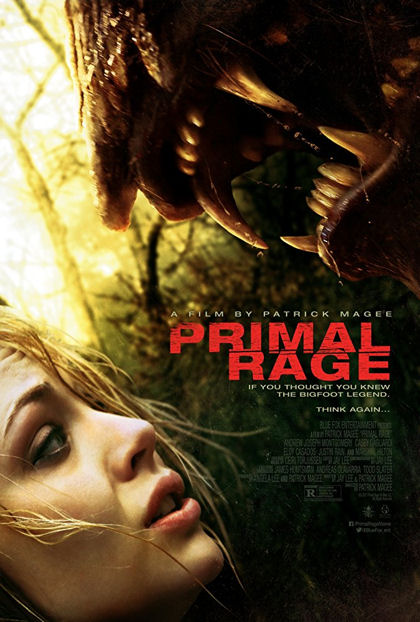 Max (Andrew Joseph Montgomery) just got out of prison. His wife Ashley (Casey Gagliardi) picks him up but it’s going to be a long ride home. An accident that may not have been so accidental leaves the struggling young couple stranded in the forest of the Pacific Northwest. Primal Rage is about to be unleashed upon them from deep in the woods in the form of a monstrous creature the local natives call Oh-Mah, better known by most as Bigfoot. Its big game hunting season and humans are the prey.

Bigfoot purists may experience Primal Rage at this intelligent incarnation in monster form. If you’re curious about such potential outrage, just ask fans of the original Friday the 13th series how they feel about Jason Voorhees using a bow and arrow in the remake. Director and co-writer Patrick Magee’s version of a Bigfoot horror movie is action in the woods in primal form. Assisted by Zombie Strippers writer Jay Lee the duo surprisingly produces the best Bigfoot movie I’ve seen. This hairy ape in the woods may have a higher IQ than fans are used to but it makes for some brutal kills and an exciting film.

The biggest compliment I can give Magee’s first feature is the look of the creature and his effects. That’s what happens when you hire an experienced special effects artist like Patrick Magee to direct a movie. He delivers on practical effects including the best jaw ripping scene I can remember on film. It’s subtle, seemingly realistic and fun to watch. Bigfoot himself looks stunningly monstrous. I love the different take, with a smarter creature and the tree bark mask that’s fittingly scary. Bigfoot's camo hidden reveal is my favorite moment of the movie and that’s pitted against an interspecies rape scene that was entertainingly savage. Magee really delivers in his first outing behind the camera.

Not all is perfect in Magee’s first horror outing though. Our lead couple played by Andrew Joseph Montgomery and Casey Gagliardi both provide fine performances in their screen consuming debut roles as does Bigfoot itself. Some smaller characters aren’t portrayed as realistically, particularly the local hunters. While it adds to a nice body count, their stereotypical rapey woodmen roles are out of place humorous in an otherwise serious film. I also didn’t see the need for the brief Native American connection but I absolutely loved the out of place Native Witch Woman. Her make-up effects enjoyably impressed. I would have sadistically relished Bigfoot display his big foot long before the rape scene but hey, not everyone has the demented mind of a headless horror critic.

Primal Rage is a movie that I would have gladly walked out of the theater having paid my money to watch on the big screen. Patrick Mcgee’s preferences coincide with my own. He uses practical effects, quick action, he tells a story and keeps his horror intriguing and fun. If any CGI was used, it was minimal and used to enhance other effects. Horror fans should catch this one in theater if they can. Stick around for the post credits to see a more sensual side of the film. I wouldn’t mind seeing that beauty get her own spin-off movie she’s such an intriguing character.