Review of “Winchester” by The Headless Critic 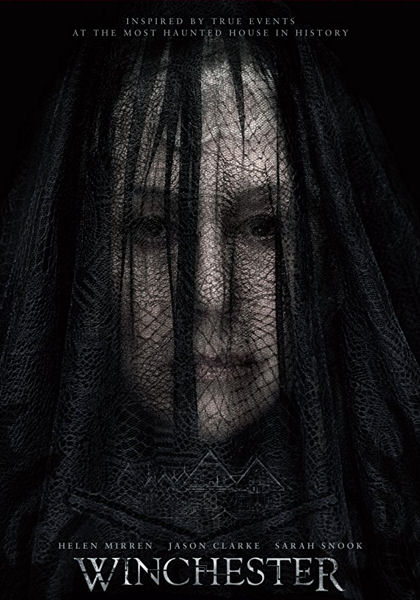 “Inspired by true events at the most haunted house in history.” Eccentric firearms heiress Sarah Winchester (Helen Mirren) continuously builds onto her San Jose home in order to stave off the ghosts of those killed by her family’s rifles, literally constructing the house that spirits built. With the Winchester family wanting more control of the rifle empire, therapist Eric Price (Jason Clarke) is hired to evaluate Sarah’s competency to head the multi-million dollar company. Are the stairs that lead to nowhere in this mansion maze of a home the work of a madwoman or will Dr. Price find that “terror is building”?

The legend of the house that inspired such authors as Stephen King to write his own horror novel is a fascinating tale in itself, even being picked up by Ripley’s Believe It or Not it’s so unbelievable. After the deaths of her husband and baby daughter, Sarah Winchester was told by a psychic that the family is cursed by the spirits of those killed by the Winchester rifles they made. Sarah believed that continuous construction kept the spirits at bay. Many died during the houses construction including in the greatest earthquake ever recorded in the history of the United States in 1906. I won’t bore horror fans who want to believe with the real story. I will only say that the myth of the woman Sarah Winchester and the house she never stopped building is far more interesting than the latest movie produced about it.

Re-written and directed by the Spierig brothers, Winchester is an unfortunate case of a production company wanting to make a scary movie about the famed horror house, forcing a story instead of following creative inspiration. I do admit that I’m not as big a fan as most of the directing brothers previous features which include the abysmal Daybreakers, the underwhelming Predestination as well as last year’s horror effort Jigsaw.

The end result is a horror feature that mimics modern day scares in a movie similar to an Insidious sequel or Annabelle spinoff. Logic is too often overlooked for attempted scares that aren’t worth the trade. The movie does look beautiful. The Winchester house and streets of San Francisco are a little too bright to be realistic but are nonetheless stunning. With talent like Helen Mirren, Jason Clarke, Sarah Snook and an impressive Eamon Farren, the performances are there even if character depth isn’t deeply explored. I do have to say that while child actor Finn Scicluna-O’Prey does a fine job, his dye job is inexcusable for a film with a budget to try and pass off as a natural hair color.

While Winchester isn’t a bad film it’s a little too modern day cookie cutter horror for my tastes. By the end, everything is wrapped up in a nice little package that includes a laughable reason for one of the greatest natural disasters in the history of this country. Anything that doesn’t fit into their perfect package like side characters and backstories are barely touched upon. Plus if you know the true story of the house or the myth fed to tourists who visit San Jose, this overexposed, spoon-fed film will just disappoint you if you have any sort of expectations going in.