Review of “The Campus” by The Headless Critic 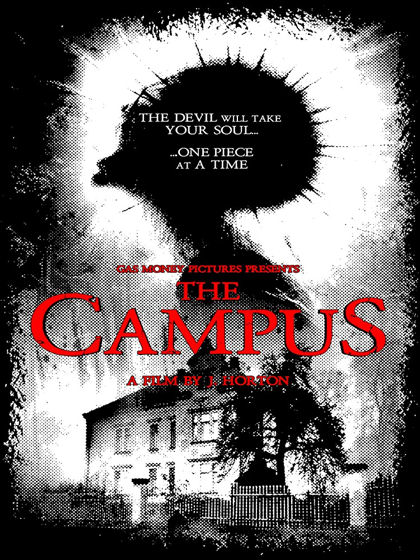 An archaeological exploration uncovers a devilish curse that only Satan himself could be satisfied with. When archaeologist Robert Wainwright (Robert C. Pullman) dies, his cursed artifact is passed on to his daughter. “The Aztecs believed the human soul is comprised of five parts, five pieces. In order for the devil to take a soul he needs to take all five.” On the night of her father’s viewing, Morgan Wainwright (Rachel Amanda Bryant) will be taken one piece at a time. The sins of thy father will be passed upon the child. The devil is coming for her soul tonight and Morgan Wainwright is going to die, over and over and over and over and…

The Campus is an independent movie that’s getting released just months after the wide theatrical release and surprise box office hit of similar Groundhog Day themed horror movie Happy Death Day. Of the two films, Happy Death Day has the budget, the experienced cast and crew and the platform for success. Happy Death Day looks more professionally shot with better lighting and even more quality performances. For me The Campus is still the better movie.

The concept of the five pieces of the soul is a far more intriguing reason for reliving the same moments over again. The floodgates of hell open in creative ways in each of Morgan’s deaths and you actually care about her survival instead of wanting her to die. Instead of Happy Death, Day PG-13, cutaway death scenes, we actually get to see Morgan die. After this movie actress Rachel Amanda Bryant is officially a pro at dying on screen. Most importantly writer and director J. Horton didn’t piss me off with The Campus unlike the similarly theme Happy Death Day did in their juvenile effort.

All isn’t perfect in this low budget feature. Satan is a presence when he rises from the fiery pits of hell. While I believe practical effects were used to portray Satan, he’s almost certainly assisted by some heavily budgeted CGI that just doesn’t look right which diminishes his arrival. Similarly created effects of fire, smoke and breaking glass look equally out of place. Story continuity also gets a little muddled through the opening and flashbacks, both of which are difficult to watch.

I have to commend J. Horton for sticking to his story and not forcing dialogue. With the exceptions of the poorly executed flashbacks, lead actress Rachel Amanda Bryant gets almost the entirety of the movies screen time. Flying solo against the forces of evil, her character Morgan is also largely left in scenes to herself. Scenes of the actress not talking are executed more realistically than most other directors would have, as they would have had her babbling to herself just to have words on screen. Horton’s creative inspiration pays homage to horror past in the form of five ways for his heroine to die including masked slashers, zombies, ghosts and more creative and humorous inspirations that you'll have to watch the movie to see for yourself.