Review of “The Neighbor” by The Headless Critic 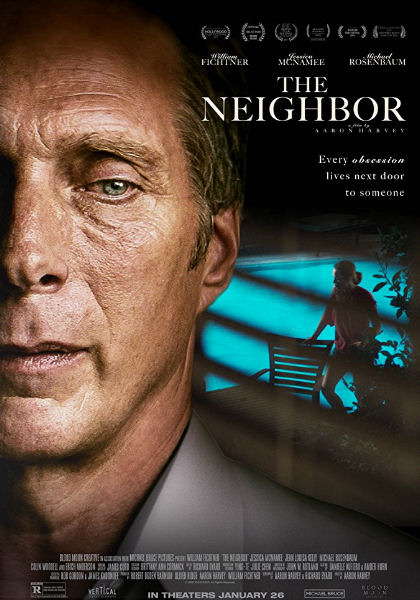 The lives of a middle class, middle aged couple are forever changed when new neighbors move in. Mike (William Fichtner) and Lisa (Jean Louisa Kelly) are co-existing in a stagnant, mundane marriage. A little excitement is thrust into their lives when slick talking, car salesman Scott (Michael Rosenbaum) and his beautiful, younger wife Jenna (Jessica McNamee) move in beside them. Every obsession lives next door to someone” and this girl next door fantasy is about to become deadly. “Danger lives next door” and someone’s knocking.

A film that's similarly themed to many movies we’ve seen before where a neighbor takes an interest in the younger girl who moves in next door. Mike's harmless attraction to his new neighbor Jenna is only expanded at their budding friendship. When Mike begins to feel Jenna’s husband is abusing her, tensions arise between Mike and Jenna’s husband Scott as well as within Mike's own marriage. As friendship grows and abuse goes on, another marriage grows cold until everything erupts in one faithful nights finale.

The Neighbor is a methodically paced suspense drama that doesn’t quite deliver the thriller I wanted. I’m fine with a slow burn but I did expect a little more pop when instead this firecracker fizzled. Veteran actor William Fichtner is given a starring role to shine as he attempts to toe the line between likable hero and menacing homewrecker.

My biggest issue with casting isn’t with Fichtner or anyone’s performance. The excellent cast did a fine job all around. The age difference between Mike and Lisa is as drastically different as Scott and Jenna. I don’t know why Hollywood continually casts actresses much younger than their male counterparts. Twenty year age differences may be common among the famous but are far less drastic in middle class America. Jean Louisa Kelly could have just as easily played the beautiful, young woman next door, being the same age as Michael Rosenbaum and fifteen years younger than Fichtner. Instead they went with a somewhat gross and much more unbelievable thirty year age difference between the lovelorn neighbors.

A fine film that some may find too slow, The Neighbor is paced more realistic than some similarly themed movies. I do appreciate the realism. I also like that director Aaron Harvey didn’t following stereotypical gender bias with the slow realization of who the bad guy really is. At the end of a slow burning fuse, I do expect a big bang, otherwise why did your fuse burn so slowly? The Neighbor is well made, it just doesn’t deliver the bang.