Review of “Fake Blood” by The Headless Critic 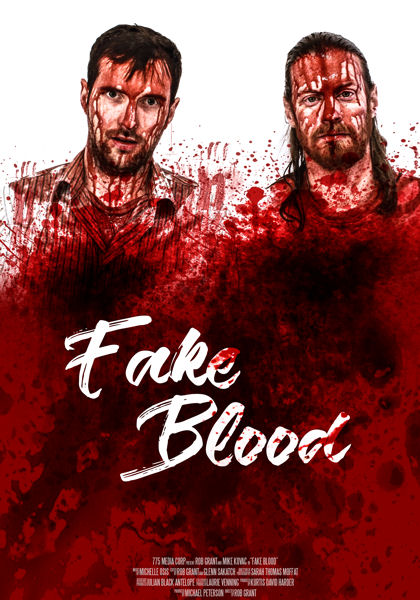 Filmmakers Rob Grant and Mike Kovac have made a number of low budget horror movies that you’ve probably never heard of. The moviemaking duo receive a video from a fan who’s inspired by one of their horror films. Unsure just how real the threat of violence in the fan video they received is, Rob and Mike set out to make their newest feature, a documentary investigating the responsibility of violence in cinema. The duo takes a look at violent scenes from movies in real life, shooting guns, getting into fights, interviewing victims and their assailants, even exploring organized crime. The deeper these lifelong friends dig into their documentary the further they’re torn apart, becoming victims themselves.

Fake Blood is a slippery slope of somewhat faux filmmaking, blurring the lines of reality. Grant and Kovac brilliantly toe the line between documentary and acting. I hate to call the film faux because it is an actual documentary that’s more real than your favorite reality show on television. The duo pulls off reality nearly seamlessly with the exception of one unrealistic performance that was the death of them and him. Make no mistake about it, this film does have Fake Blood.

Having never watched a Grant/Kovac production before, as they admit in this latest movie that most have not, I am very impressed by my first exposure to them. Flashbacks to their previous work shows beyond low budget endeavors that aren’t endearing me to watch their collective works. Fake Blood however is an impressive outing, blurring the lines of what’s real better than I’ve seen since the Blair Witch Project twenty years ago.

Both Rob and Mike are intriguing characters. Mike Kovac in particular has a likeability about him that would have me watching if he were in a reality show. If his other works are acted in the same light as this “documentary”, Kovac has a believability about him that far exceeds his name recognition with the potential for being a breakout star in the industry. If Rob Grant doesn’t get him killed first.

For a couple of guys who’ve made a few films that no one has heard of I don’t think I could recommend Fake Blood higher. I enjoyed the exploration of violence in film, the responsibility of the filmmaker of any genre and the turn at the end, even if it could have been executed a little more realistic. Pun is intended there. I also enjoyed and agree with the comment that romantic comedies destroy more lives than horror movies. Now, someone pick this movie up so it gets distributed to the masses for someone will discover and give these guys a budget so we can see what kind of fake blood they can really throw at the screen.