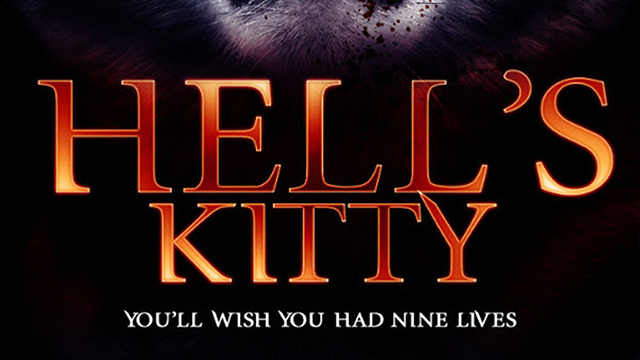 FROM THE NEW HELL’S KITTY MOVIE

The movie Hell’s Kitty is about a Hollywood writer, who tries to find love in L.A. with a possessed and possessive pussycat named Angel, and features more horror icons than any movie in history. Guest stars include: Dale Midkiff(Pet Sematary), Doug Jones (The Shape of Water), Adrienne Barbeau (Swamp Thing), Ashley C. Williams (The Human Centipede), Kelli Maroney (Night of the Comet), Courtney Gains (The Children of the Corn), Barbara Nedelkajova (Hostel), and Michael Berryman (The Hills Have Eyes); and costume work by Charles Chiodo (Killer Klowns From Outer Space). Lee Meriwether (Batman) known for her performance as Catwoman in both the original Batman movie and the TV series also makes a cameo in the film. Nina Hartley (Boogie Nights)has a bit part as a nightmarish zombie, too. The film isscheduled for release on VOD 3/13 and DVD 3/27 in by Wild Eye Releasing and will also screen at the Chinese theater, February 22, at 9:30pm, as a fundraiser for FIXNATION.org to benefit cats.

ABOUT THE SONG – CHAINSAW KITTY

The writer / director Nicholas Tana (Sticky: A (Self) Love Story), who also appears in the film, worked closely with the Hell’s Kitty composer, Richard Albert (Losing Touch), to create music for the film that properly reflects the movie’s antagonist, Angel. Angel is a cute and loving cat with an evil, jealous side to her often onerous personality, both supernatural and schizophrenic. CHAINSAW KITTY, was written, performed, and recorded by Richard Albert(Losing Touch) with lyrics by Nicholas Tana (Sticky: A (Self) Love Story). The song was originally intended for a scene with Lou Ferrigno (The Incredible Hulk), in which the cat’s claws turned into chain saws. Though that particular scene was never shot, the creators, Nicholas Tana, and producer Denise Acosta, loved the music enough to include it in another scene involving Ashley C. Williams (The Human Centipede) and Barbara Nedeljakova (Hostel), rocking out to it on all fours!

ABOUT THE SOUNDTRACK – COMING SOON

The upcoming Hell’s Kitty soundtrack is to be released after distribution of the film in March by Wild Eye Releasing; however, is currently available for review. Appearing on the soundtrack is the Hell’s Kitty theme song, My Pussy’s Possessed, which is used as the central score throughout the film.

“MY PUSSY’S POSSESSED was inspired by my love of the whimsical, haunting compositional style of Danny Elfman, those quirky but memorable Meow Mix commercials from the late 70s, and the stirring flying Monkey chants from The Wizard of Oz.”

The music for the soundtrack was created as an international collaboration between writer/director, Nicholas Tana, who lives in The United States, and composer, Richard Albert, from Germany. Tana wrote most of the lyrics for the songs, as well as some of the melody lines and chord progressions. Richard Albert, produced, mastered, and contributed the music, andvocals, for every song.

“The choice of musical styles available on the soundtrack, is meant to reflect the bizarre and twisted taste of the movie's main antagonist, Angel, a fiery hell cat with a penchant for ear-shattering rock songs, and a weakness for cheesy 80's love songs.”

“The CATchy combination of rock, death metal, and (even) cheesy love songs, which the album contains, is enough to fulfill nine lives, and have you dancing so hard, you may not always land on your feet.”

Also featured on the Hell’s Kitty soundtrack is BRAIN ADAMZ, and DOWN BELOW, and the pop opera song, TONIGHT YOU'RE ALL I NEED, performed by HermanoBlanco (Nicaragua), produced by Richard Albert, with lyrics written by Nicholas Tana.

“BRAIN ADAMZ is what Brian Adams might sound like if he played in a Death Metal band.”

“DOWN BELOW was inspired by Maury Laws’ Heat Miser/Cold Miser, and created for the film’s infernal finale.”

“TONIGHT YOU’RE ALL I NEED is reminiscent of artificial fireplaces, candles, and hallmark cards; a tribute to 70s love songs designed to get you laid. And it’s the most romantic love song ever written (for a cat, anyway).” – Nicholas Tana, Writer / Director