Review of “Hell’s Kitty” by The Headless Critic 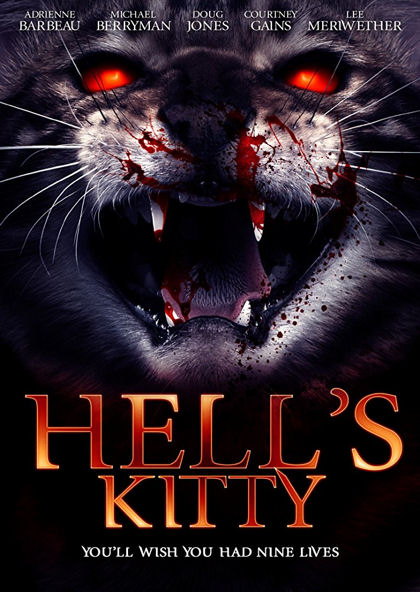 Nick (Nicholas Tana) is a lonely screenwriter struggling to make it in Hollywood. Nick isn’t suffering from your typical starving artist angst though. Nick has a bloody pussy with an insatiable thirst that’s never satisfied. The lady love of Nick’s life is a little overbearing. Overbearing to the point of murder. Nick believes his pussy is possessed. He’s willing to insert anything into this pussy problem to exercise it out. Unfortunately for him this pussy is no Angel, she’s coming straight from hell.

Unrightfully portrayed as a feature film, horror fans should know what they’re getting into before they buy. Hell’s Kitty is a horror homage web series that got so popular it was picked up for DVD just in time for the release of the “Expendables of Horror” Death House. It’s given a nice wrap around and plays out like a feature for the collective release.

Knowing that going in, horror fans should also know you’ll get to see a slew of icons of the genre. Adrienne Barbeau (Swamp Thing, The Fog, Escape from New York, Creepshow), Michael Berryman (The Hills Have Eyes), Lynn Lowry (The Crazies) and Kelli Maroney (Night of the Comet, Chopping Mall) are just a few of the horror icons you’ll see. Many other celebrity names outside the genre also make appearances including Cat Woman herself Lee Meriwether.

The most lighthearted fun came as exorcist priests played by Doug Jones (Pan’s Labyrunth, Hellboy, The Shape of Water, Hocus Pocus) and the self-proclaimed "petophile" Bill Oberst Jr. (Death House). Doug Jones, who usually finds himself behind make-up for his films, gets a chance to shine as the demon possessed priest with a hairball from hell. His facial expressions are Jim Carrey eccentric and I mean that as a great compliment in this over the top role. In a cast of cameos Jones and Oberst steal the show shining like the stars they are.

Careful to follow up such fun roles creator, writer, director and star Nicholas Tana brings in a couple of grown children from the corn fields in John Franklin and Courtney Gains of Children of the Corn. My second favorite guest starring spot came from Pet Sematary’s Dale Midkiff as the off the wall Rosemary Carrie. It’s a completely different character than what you’d expect of the veteran actor who looked to have a lot of fun in the cross dressing role.

The female equivalent to the male duo’s comedic performance comes in Ashley C. Williams (The Human Centipede) and Barbara Nedeljakova (Hostel). With Nicholas Tana these two form a mé·nage à trois of horror. In yet another film, Ashley C. Williams confirms her love of all things chocolate. Barbara Nedeljakova gives my favorite female performance in her masochist, blood splattered role. I’d also be remised if I didn’t mention Nina Hartley as a dominatrix lawyer which was a lot of fun. She comically ran from slasher kitty just like we’d see in any Friday the 13th style slasher film in apartment scale form.

I love Nicholas Tana’s concept for Hell’s Kitty. With Death House bringing the horror stars in for a collective film, Hell's Kitty brings them in for a horror comedy. An idea that started out as a way to raise funds for animals, may prove better as a web series than a feature film. Lighting, sound and continuity of script aren’t the most professionally executed. Nick’s revolving apartment door of love interests and celebrity cameos plays out better week to week than it does smashed together. Horror fans are still given a chance to collect a good web show on DVD with so many fun performances from your favorite stars. You just can’t pass it up. I’d love to see a version of Hell’s Kitty or a similar horror themed show done as a weekly tv series with a bigger budget.