Review of “Red Eye” by The Headless Critic 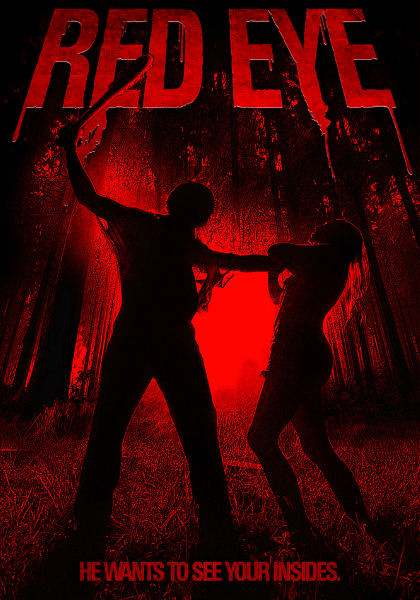 Four friends from near Pittsburgh drive into the remote backwoods of West Virginia to make a documentary about a local legend known as Red Eye. The group is led by horror nerd Gage (Scott King) who’s the only one that really cares about chasing the West Virginia legend. Gage is documenting their trip in hopes of making the myth come true. The deeper the group goes into the woods, the harder it will be for them to escape reality and the Red Eye monster who walks with them. “He wants to see your insides.”

Red Eye is a super low budget, outside Hollywood horror film that was kickstarted by fans on Indiegogo. It’s first time feature filmmaking duo Tristan Clay and Destinie Orndorff’s version of the familiar slasher in the woods horror concept. I never would have guessed this film to have been made for less than a year’s minimum wage salary or by a couple of young filmmakers, barely out of their teens. Tristan’s directorial feature debut is a yin yang of novice filmmaking. At times the sound in the movie isn’t feature film friendly; however his camerawork is almost always on point. Impressing the most are the nighttime shots in the woods which play out perfectly against many other bigger budget films that get lost in the dark.

Acting is equally spotty with dialogue and fake accents that are largely delivered leaving something to be desired. Some of the actors are very experienced but the lead was cast well in newcomer Scott King. While I’m not sure any other actors will be sticking around for the sequel, King steals the shoot in his first performance. His simple way of responding to dialogue is basic and refreshingly realistic.

The true star of Tristan Clay’s Red Eye are the kills. With a small cast of six we don’t get a high body count. Clay and Orndorff make the kills we do get count. Budget constraints does lead to cutaway scenes and a corny eye removal but what the actors may have lacked in delivering dialogue, they made up for by dying. You can tell Clay and Orndorff are slasher fans in the fun they have killing off their cast of characters.

“I might have to use your blood as a little lubricate” to finish this review. If budget horror isn’t your thing and you need another reason to watch, Red Eye has just what you’re looking for, necrophilia. A little necrophilia never hurt anyone, because they're already dead! It also proves to be my favorite scene of the movie.

Tristan Clay and Destinie Orndorf prove they’re a formidable pair. They also earned attention for their violence against women both living and dead. I find that humorous considering Red Eye is written by a woman and slashers are violence against women in nature. “Will their passion bleed through? Or cross the line?” Red Eye has it follies but throws buckets of blood and fun at the screen. I’ll keep my eye on this duo and see what kind of gore they can produce in their twenties with more experience and a better budget.