Review of “The Terrible Two” by The Headless Critic 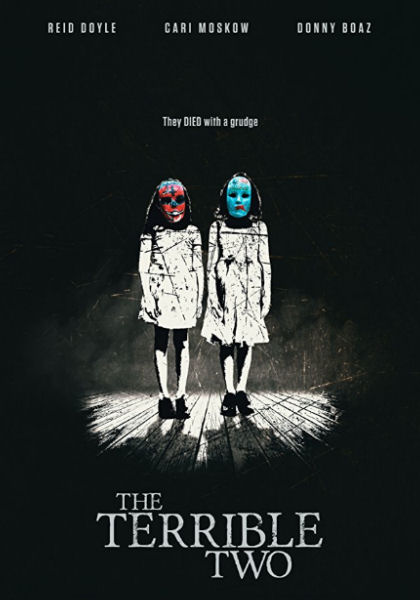 “It’s been claimed often that this story or that story is based off true events. In January of 2016 the following events took place in this house in Greenfield, North Carolina. To this day some of the details of exactly what happened there have baffled authorities. But what neighbors and police discovered at 106 Chelsey Lane was utterly shocking and disturbing, stunning family and friends and making headlines around the world. This is what really happened to Albert and Rose Poe in the days following the one year anniversary of the death of their two girls.”

Seven years ago Albert and Rose Poe bought a house to raise their unborn child in. That new chapter of their lives ends six years later when their two daughters fall off the roof of their home, tragically dying. A year after the tragic accident the young parents are still haunted by the death of their two girls. Rose (Cari Moskow) discovers there’s more to their home than their realtor (Donny Boaz) divulged. She begins to believe she’s communicating with her daughters. “Who wants to lick the spoon?” Rose starts blaming her husband for their daughters' deaths. Albert (Reid Doyle) fights to save his wife’s sanity as they both find out their house may be haunted by more than just memories. “They DIED with a grudge.”

An Indigogo campaign pre-dates the films production. The result is a professional looking film with sketchy but not bad sound quality and a faint and repetitive score. Though the runtime was under an hour and a half, there was an extended build up with not quite enough payoff in the finale. A good twenty to thirty minutes could have been removed from the length and still got across an equally poignant story.

The small cast is primarily based on the three characters already mentioned. Actor Cari Moskow cries well on camera, Donny Boaz has a natural douche quality about him and Reid Doyle is very likable which plays right into his role. All three struggle to deliver the unrealistic dialogue, making the movie largely unbelievable. Performances take the viewer right out of the film. All of this can’t be blamed on the actors. It’s not normal for a husband to hear his wife tell him that she talked to their dead daughters last night and he respond by asking her if she wants to cup of coffee, then invite her to take a shower. Nothing in this film is written or delivered in a realistic way.

There is promise in director Billy Lewis’ sophomore feature. I liked the realism in the family’s connection to their religion. Unless a movie is specifically about religion Hollywood productions too often leave it untouched upon. Almost ninety percent of America identifies as religious and most of those would call upon their God or beliefs when faced with situations found in horror movies. Realism like that is appreciated in film.

The little girls surrounding the house is fun. Two knife wielding children in masks running about like little slashers is simultaneously creepy and adorable. They move in on the house like The Strangers but in non-threatening roles. Prancing around in their bright colored masks they looked very similar to last year’s Tragedy Girls only in miniature form. I couldn’t help but view the children as actors and be proud of them for hitting their cues at the windows but they provided a creepy visual which also contributed to a good cover for the movie. Unfortunately their echoing voices adds to other sound issues in the film once again pulling the viewer from believability. Taking the children a more elaborate direction would have helped my own personal entertainment. It could have even been done in comical fashion and been enjoyable.