Review of "Coffin 2" by The Headless Critic 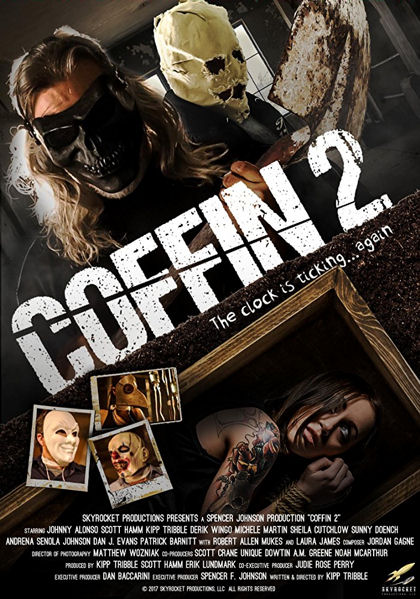 “It’s easier to do a story on a crazy man in prison than the boogey man. I only wish I’d made him up.” –Jack Samms

The Deathstalker Killer case was never solved. Jack Samms’ story of a mysterious conman who goes by Trick (Johnny Alonso) wasn’t believed by the courts. Jack Samms sits in prison and someone has decided they want him out. Five seemingly unrelated hostages have been taken and Trick is among them. The apparent Deathstalker Killer (Robert Mukes) is playing a slightly different game. Paralyzed from the neck down, the five hostages are forced to face one another and the consequences of their lives. A FBI agent and a former detective race against the clock to find the captives location and save them from a promised execution. Tick, tock, tick, tock, tick, tock….

Sadly most sequels try to turn things up a notch and outdo the original when the calmness of the original is what warranted the sequel in the first place. In the case of Coffin 2, stepping it up a notch actually works. I enjoyed the original Coffin which had a simple story with a twist ending. I would have liked to have seen a little more action hero out of the Jack Samms character. The character of Trick was always a little too weaselly for me. Together the Batman/Joker pairing of Jack Samms and Trick play off each other excellently and in Coffin 2 “The Clock is Ticking Again”.

Patrick Barnitt still doesn’t get to play the complete badass I’d have liked to have seen from Jack Samms. Not to say he doesn’t have his moments. Trick is traded in for the much more fun Buddy (Robert Mukes) who at 6’10” fits the role of Deathstalker Killer well. I’m not normally someone who goes for size in their villains but Mukes also brings character to his big man role. Trick is reduced to a simple victim, well maybe not so simple victim… While the simplicity I enjoyed of the original is somewhat lost, Coffin 2 digs itself out of the ground and has fun. I’ll even venture to say I look forward to another sequel where hopefully series creator and director Kipp Tribble will finally turn lose his lead character who looks tailor made for the role of a good guy hitman.