Review of “Soft Matter” by The Headless Critic 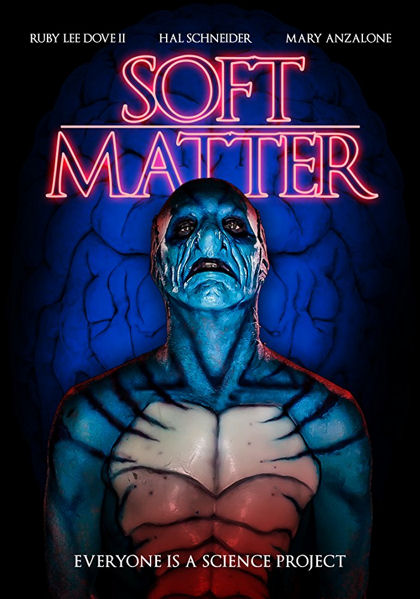 Two young graffiti artists break into what they believe is an abandoned medical research facility in hopes of finding a blank canvas for their artistic expression. Instead the two stumble onto a secret team of researchers trying to unlock human immortality even if it costs lives to unlock eternity. Their research has pissed off an ancient Sea God (Mykal Monroe & Sam Stinson) who made her way through a mop bucket to stop them from discovering immortality. Caught in the middle of creationism and science this ragtag intruding duo must battle God and mad scientists if they want to hang on to their mortal lives.

Haircut (Devyn Anthony Placide) and Kish (Ruby Lee Dove II) are just looking to make the trashy world a little more beautiful. Haircut’s turtle is dead. I’m sorry for his loss but he got a pet ghost instead. Kish is one third beauty, one third brains and two thirds badass. Something’s just not adding up here... Kriegspiel (Mary Anzalone) and Grist (Hal Schneider) are as mad as scientists can get. They’re the only two attendants attending a hospital research facility full of patients. Admittedly these patients range from soft matter masses to lobster women who eat purple goop but they’ve still got to be around to keep Mr. Sacks from ruining his freshest kicks. They just can’t seem to unlock this whole immortality thing. Maybe they need linoleic acid… The small cast does wonders in Soft Matter delivering deadpan dialogue awkwardly perfect.

The bible teaches us that when all mankind spoke the same language, they came together to build a stairway to heaven that became known as The Tower of Babel. Knowing that the only way to reach heaven is through salvation, God descends through the heavens, shatters their tower and confounds human language so they don’t repeat the same sin. Soft Matter teaches us that when two mad scientists put their brilliant but crazy minds together in an abandoned research facility, they work together to unlock the secret to immortality. Knowing that human immortality is futile, a God of the sea ascends from a mop bucket, shatters their facility and tries to kill everyone involved so she doesn’t have to worry about them further.

In his feature film directorial debut Jim Hickcox makes a no budget comedy horror that’s the best I’ve seen since Jim Hosking’s The Greasy Strangler. Soft Matter is a soft matter version of Hosking’s cult favorite. What does that mean exactly? Everything in Soft Matter is squishier, grosser and just a little bit more off-the-wall. The films are so similar in their low budget brilliance I thought for sure I would see Strangler director Jim Hosking’s name attached. It isn't, but Soft Matter keeps it Greasy. Dialogue is delivered over the top or deadpan with little in-between. There’s grotesque goo, random song and dance and an unexplained artistic mustache. Even the score is the most simplistically brilliant film sounds I’ve heard since Andrew Hung’s greasy pink masterpiece. These are just a few of the wonders you’ll find in this mad hospital of comedy horrors.

Soft Matter is the next evolution of interspecies love in an unholy combination of immoral immortality. As The Shape of Water ascends beautifully from the sea, Soft Matter crawls comically out of a mop bucket. If Guillermo del Toro made The Shape of Water on no budget and in the comedy stylings of Peter Jackson’s Brain Dead it would be this movie. The characters Kriegspiel and Grist may not be the only mad scientists combining DNA out there. Writer and director Jim Hickcox has combined the amphibian DNA of The Shape of Water with the greasy chromosomes of The Greasy Strangler successfully making Soft Matter his science project of film immortality. This movie may “turn off the old man” but it should excite an Adult Swimming younger crowd and horror faithful alike. Want a spoiler on how this movie ends? It ends the same as Jaws 3. Don't know how Jaws 3 ends? Roughly the same way as Jaws. Buzz Off!