Review of “Mohawk” by The Headless Critic 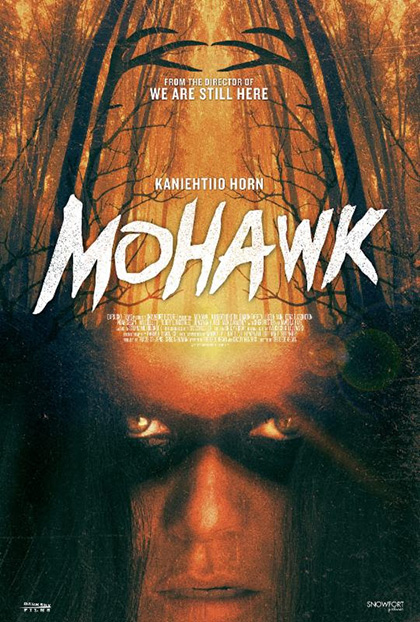 As the War of 1812 spreads across New York State, a Mohawk couple gets caught in the crossfire between the United States and the red coats. A young Mohawk woman Oak (Kaniehtiio Horn) is torn between two lovers in fellow Mohawk Calvin (Justin Rain) and British soldier Joshua (Eamon Farren). The unlikely trio crosses paths with an American regiment leading to an unfortunate confrontation where regiment leader Hezekiah’s (Ezra Buzzington) son Myles (Ian Colletti) is killed. A woman and her two lovers must fight off an American military hell-bent on revenge and willing to track them to the ends of the earth. A brutal battle ensues leaving a blood soaked New World behind.

Justin Rain’s look as Calvin Two Rivers is excellent. With such a menacing look he could have had a few more killer displays befitting such a character. Eamon Farren’s role as Joshua Pinsmail is the most convincing of the film fitting the early 1800’s time. He’s proving himself to be a wonderful actor in each new film I see him in. Ezra Buzzington also does an excellent job in a fun performance and standout role.

We Are Still Here director Ted Geoghegan tackles a period piece on a budget in his second feature outing. I’m a stickler for period films. You don’t have to be picture perfect but you do have to make me believe. From accents to outfits, little about this action, thriller gets me lost in time.

Budget may have limited what Geoghehan could do in death. While we’re given a slasher high body count, budgeted CGI is briefly glimpsed over what could have been fun practical effects. A large opportunity was missed with WWE wrestler Jon Huber (Luke Harper) in the cast. A fun battle between the largest cast member and the smallest could have been had à la They Live. We still get a good decapitation of a different character which will always be approved by Without Your Head.

Stick around for the final twenty minutes when all hell breaks loose and Kaniehtiio Horn gets to show you what a bloody Mohawk is all about.