Review of “Annihilation” by The Headless Critic 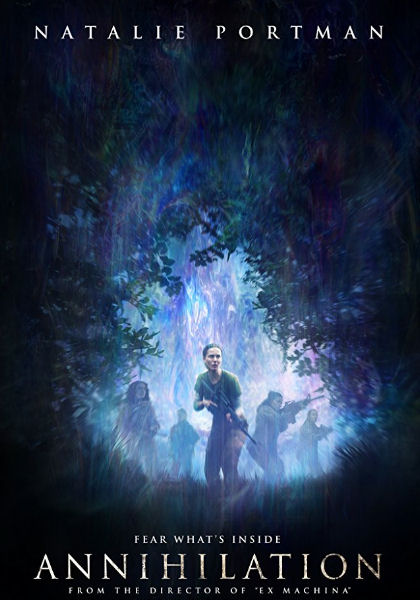 In a flash, fire from the sky strikes a remote part of earth and something otherworldly begins to grow. Three years later what’s become known as the “shimmer” is still growing. Miles wide the American government is based around the growing force while keeping it secret from the public. Nothing that’s entered the shimmer has returned. No signals, no electronics, no life, until now... A soldier who entered the shimmer a year ago has returned with his organs scrambled and his memory gone. Before this unknown force encompasses earth in total Annihilation, a new group is about to go in.

A biologist, an anthropologist, a psychologist, a surveyor and a linguist walk into a shimmer. The end result will leave you as questioning coming out as it did going in. Annihilation isn’t the movie for complete explanations. When you finally get an answer it changes the question.

Ex Machina director Alex Garland follows up his acclaimed first feature with a bigger budget Hollywood production that hits on almost every note of filmmaking. Within the shimmer is an overgrown jungle of not quite right nature. It’s beautifully shot with bright colors and visually pleasing everything. A cast of talented actors lead by Natalie Portman perform their roles perfectly. Garland successfully builds suspense and keeps you questioning as the world within the shimmer as it’s explored.

Based on a novel from Jeff VanderMeer, the film adaptation of Annihilation comes down to storytelling. After two hours of becoming invested in the ups and downs, lives and deaths of a nearly all female cast, a long journey into the unknown doesn’t completely fulfill. Like similar films before it Contact, Arrival and Interstellar, successful filmmaking and an intriguing build somewhat disappoint in their endings. Perhaps this type of story is incapable of having a satisfying ending? Annihilation will probably follow suit with the previously themed films in that most people love them with a significant portion of people also hating them. I personally fall in the middle on most of these types of movies.

As far a genre goes it’s definitely Sci-Fi first. There are some horror qualities as everyone who walks into the shimmer does not make it out. While not a creature feature by any stretch some mangled mirrored creatures do make for some exciting horror. If you want to “Fear What’s Inside”, the visuals are worth seeing this one on the big screen.