Review of “Return to Return to Nuke ‘Em High aka Vol. 2” by The Headless Critic 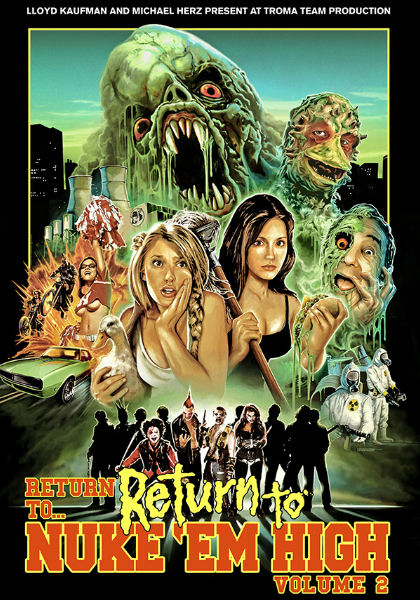 1986 brought in a freshman Class like no other. In 1991 the sophomores had a Subhumanoid Meltdown. In 1994 the Good, the Bad and the Subhumanoid’s completed their junior year. They returned in 2013 for their final senior year. And in 2017 those retards who didn’t graduate with the rest of their class, repeat the same year over.

“What’s going on at Nuke ‘Em High, what’s going on?” The ongoing saga of the Tromaville High School comes to its thirty year culmination (until the next sequel) in a film three years in the making. The toxic nuclear power plant that once stood in Tromaville High’s backyard in the 1980’s has been replaced by Tromorganic food supplies. Putting an organic food factory on top of a nuclear wasteland wasn’t a good idea. Letting it supply the school’s lunch is even worse! As all hell broke loose in the Return to Nuke ‘Em High, we Return to Return to Nuke ‘Em High to pick up the pieces of where we left off.

Tainted tacos have caused toxic transformations and immediate death to some of Tromaville’s school children and we aren’t talking about the tainted teenage twats of Tromaville’s high school sweethearts. Tromaorganic food is supplying the deadliest lunch program since pink slime wasn’t introduced into your kid’s school. What kind of God would let this happen? Those kids unlucky enough to survive not having their brains explode either end up cretins or have their dicks fall off! The brown baggers who didn’t participate in the school lunch program are left to fight for survival. No different than any other day in high school.

We Return to two brown bag specials in Chrissy (Asta Paredes) and Lauren (Catherine Corcoran), a couple of carpet munching lesbians who don’t like tacos. What kind of God makes a lesbian who doesn’t like tacos? The last time we returned to Nuke ‘Em High, Lauren got raped by her pet duck. This is no aquatic love story taking home an Oscar. We Return to Return to, to find out Lauren is about to have a bastard rape baby with a beak. What kind of God would allow an interspecies abomination to bear fruit?

For those of you worried this is just another tragic life lost to single motherhood, don’t. Lauren’s lesbian lover isn’t going to let a little duck rape baby stop her from scissoring her one true love. “All aboard the skin boat to tuna town.” Join the Return to Return to Nuke ‘Em High as two lesbians and their duck, rape baby try to survive high school and defeat the corrupt politics of Tromaville and the world!

What kind of God would make such a movie? Troma founder, schlock master and B-Movie legend Lloyd Kaufman of course. Troma is still producing plenty of no budget films every year but few have Lloyd Kaufman behind the camera. Lloyd’s sense of humor is well apparent in this 80’s one-liner throwback. Fans of the original Class of Nuke ‘Em High will find it 1980's reminiscent, whisking them away to a simpler time when a celebrity was in the white house and we were on the brink of war with Russia.

In his seventies, Kaufman’s wit is as sharp as ever. He keeps it topical as he’s known to do, trading in the worrisome nuclear power plants of the 80’s for chemically induced “organic” foods and school lunch programs of today. While the cretins remain straight out of the 80’s as they should, our heroines are a couple of lesbians who just want to be accepted. Of course you get glimpses of all the Troma actors, characters, car flips and breasts you’ve come to expect.

The opening of Return to Return to Nuke ‘Em High is absolutely the best opening to any movie ever period! The Carrie inspired school shower scene not only has more breasts than you can throw your tampons at, it also drips more blood and green, toxic sludge than those tampons can absorb. As legless women walk through blood, other topless beauties get covered in it. You couldn’t ask for a better introduction to a Troma movie. It is blunt comedy brilliance on screen.

The movie that follows is a pieced together clip show with enough cutaways and flashbacks to rival a Seth MacFarlane production. It took three years to complete for a reason. I know this type of quick wit filming has its fans but I am unfortunately not one of them. I do believe the Troma and Kaufman faithful, as well as fans of shows like Family Guy will find this Return to be their comedy styling. I personally enjoyed the nostalgia of this worthy edition to the Nuke ‘Em High class.