Review of “Hectic Knife” by The Headless Critic 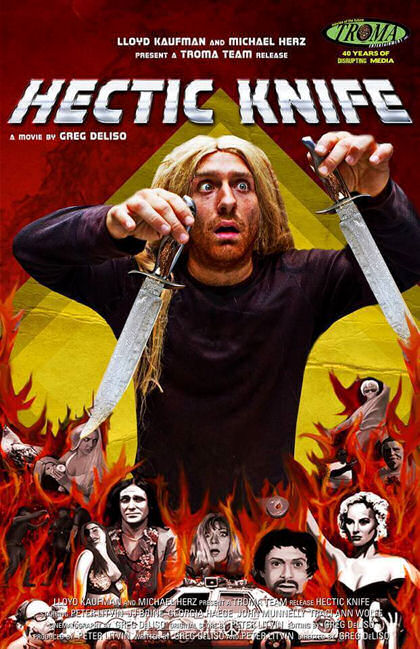 His name is Hectic Knife (his given name at birth) and he’s a big fucking idiot. People say he’s a vigilante but mostly he’s just a piece of shit. He only eats hard boiled eggs and lives in a city ruled by scum and treachery. There’s all kinds of baddies, street tuffs, criminals, they even got these motherfuckers that’ll shoot you in the face. You slay one, you slay them all. It doesn’t mean he’s going to get a 401k plan. The way it’s always been around here, if you’re in trouble and you need help he’s supposed to save you, I don’t give a fuck who you are. Saving people used to be worth a damn to him. Now it sucks and he’s sick of it. Next time he hears a call for help, he’s going to blow his fucking brains out... Wait, that doesn't make any sense, since he carries knives... Well at least he won't give a shit when he saves them.

Hectic Knife (Peter Litvin) is a not so super Superhero. He’s experiencing severe burnout to say the least. His best friend Harry (Richard Krohn) turned bad. His second best friend Rockin Ray (Rockin Ray) is dead. Hectic’s new girlfriend Frannie Glooper (Georgia Kate Haege) is stealing his money while succeeding with her accents. Hectic’s light won’t stop ominously swinging in his apartment. His roommate Link (John Munnelly) wants to let Frannie sit on his face and he has a tracking circuit board embedded in his arm. Meanwhile, “Evil Piggly Doctor continues to blow up children’s heads with explosives.” Hectic is struggling for a reason to save these ungrateful, innocent assholes from the bad guys. “Fuck you criminal! Got what you deserved didn’t you?” “You’re dying and I don’t give a fuck. In fact, I’m happy about it so there. Criminal dickhead.”

Hectic is also struggling for a reason to live. He regenerates though, so he can’t really die. He’s grown more new arms in his life than he's grown erections. He’s not even really that good with his knives; he gets stabbed more than he stabs. I guess when you can’t die your weapon of choice becomes deadlier. Hectic finds a new reason to live when the villain Piggley Doctor arrives and Hectic gets back in touch with his family. Everyone on Earth will die if Piggley Doctor isn’t stopped. If Piggly Doctor kills Hectic Knife he gets world domination!

“This movie sucks!” Well, not exactly… Hectic Knife is made on a minimum wage salary and you still may wonder where all those hundreds went. Black and white filming on a budget is magnificently done, covering up what production values lack in the best black and white feature I’ve seen since Clerks. Acting is over the top for matching toddler learning level dialogue. Everyone states who their character is and what they’re doing and it’s absolutely amazing. “I’m a junkie” says The Junkie (Jesse Wozniak). I can’t tell you how many films have rich dialogue but just can’t make you care. Hectic Knife humorously entertains in the most simplistic way. Brilliance is found in the creativity of the basics and this basic dialogue is comedy brilliance! “Sometimes you just gotta let the bitch fill the cup.” -Life advice from Hectic Knife.

Not all is shiny knives of glory in Greg DeLiso's debut feature but it isn't over the top acting or lack of production values. The film becomes self aware in its final act which is something I pet peeve hate. To make up for it you do get two minutes and forty-two seconds worth of “fucks”. How would I know that out of the 1:22:31 runtime, 2:42 are strictly devoted to saying “fuck”? Distributor TROMA Entertainment felt this accomplishment worthy of cutting out and publishing online in its own Hectic Knife “fuck” filled video. So come get your “Blood, Babes and... Bagels!?” from Hectic Knife where you’ll learn life lessons in black and white. Alright this review is over, “I got to take a fucking shit.”

Available now on Blu-Ray from TROMA