Review of “Death Wish” by The Headless Critic 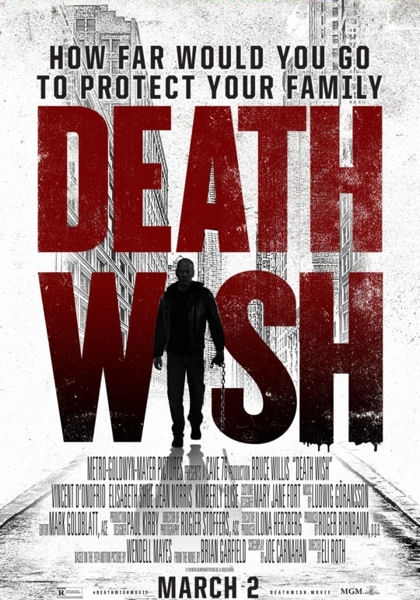 A brilliant surgeon at a Chicago ER gets the call to the operating room of a lifetime. Dr. Paul Kersey (Bruce Willis) is used to dealing with the aftermath of the growingly violent life in Chicago but nothing could prepare him when his wife (Elisabeth Shue) and teenage daughter (Camila Morrone) are rushed into the OR after a deadly home invasion. Everything changes when this peaceful doctor’s life is taken from him. “How Far Would You Go To Protect Your Family?” With a police wall full of unsolved murders that continues to grow, Dr. Kersey isn’t going to leave justice in the hands of the authorities. As Doctor turns vigilante, he gains unwanted but not unwelcomed media attention. The notoriety only fuels his need for revenge. Judgement day is coming for those who took his family, from a man who has a Death Wish.

Horror director Eli Roth brings this recreation of a cult favorite action film back to the big screen in his first non-horror feature. Roth’s iconic horror introduction to film that started his career never struck me as anything exceptional simply throwing buckets of blood at the screen. I much more enjoyed his last two outings that didn’t get as wide of a release or as much notoriety. His sixth film is Roth’s return to wide release giving him a budget totaling almost as much as his first five films combined. For my money, it was well spent. Real world horrors replace typical Roth frights when lives are lost to a home invasion. In a Hollywood world where remakes are made just after the last sequel is released including Roth’s own Cabin Fever, Death Wish originated five decades ago having spent plenty of time on the shelf before being dusted off for a redo.

Accompanying Willis is an excellent cast making the “role call”. One of Hollywood’s best, Vincent D’Onofrio stars in a supporting role. Dean Norris of Breaking Bad fame has a very similar role here as Detective Kevin Raines. The cast also includes 80’s heartthrob Elisabeth Shue, Kimberly Elise and three impressive “bad guys” in Jack Kesy, Ronnie Blevins and Beau Knapp. In fact the only role that didn’t work for me was the daughter. Hollywood once again polishes up something that would have been better off left more realistic, casting model gorgeous Camila Morrone as Jordan Kersey. Through no fault of actress who did a fine job, a more typical looking daughter would have made the role resonate more with a parental audience.

Those same viewers who would have preferred to see the beautiful Camila Morrone to an actress who looks like their own daughter or relative are probably the same fans who prefer the death defying action in Die Hard 5 over the barely surviving action or Die Hard. Action may be limited but it also means something, having invested time into characters to make you care. It's throwback action movie that tells a story with it's kills making it one of my personal favorite Eli Roth films to date.