Review of “Seeds” by The Headless Critic 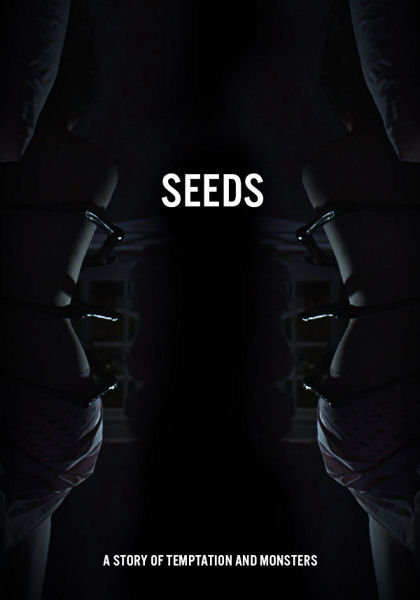 Let me tell you “A Story of Temptation and Monsters.” With his life spiraling out of control Marcus Milton (Trevor Long) retreats to his family home along the New England coast. Instead of finding the solace he seeks, inside the house hides a monster waiting to be unleashed. Marcus’s brother Michael (Chris McGarry) is splitting from his wife and leaves his young son Spencer (Garr Long) and teenage daughter Lily (Andrea Chen) in the capable hands of their uncle at the very worst time. It’s there underneath the bed when you lay down to sleep at night waiting… It crawls into your dreams burrowing deep into your mind. It preys on your darkest fears bringing forth your deepest desires. Uncle Marcus can feel it on him, reaching for him when he turns around, weighing on his mind. Constantly on the brink of losing all that makes us human, Marcus is about to lose his mind. Can he protect Lily and Spencer from the monster that lives inside? Can he protect himself?

A first time filmmaker from an upstart production company make the best modern day adaptation of a reminiscent seventies era Giallo film I’ve seen. All done in monster movie form if that’s possible. A long build is set to wide shots of a beautiful backdrop with bright colors contrasting to a dark gothic tone. All accompanied by a befitting score that switches from classical to creepy. Performances are much more grounded in reality than the Giallo eccentricities. Trevor Long impresses in a role that should get him noticed as a go to actor for characters of depth. His descent mirrors Jack Nicholson’s iconic portrayal of Jack Torrance in The Shining. Acting, writing, directing… Trevor Long’s performance, the study of his character and relationships and the filmmakers brilliant pace hits an unholy trinity of mind-altering horror and good filmmaking.

Crawl into the mind and house of Uncle M and the dark thing preying on him there. Decide for yourself if he’s depraved or a victim of dark seduction. Let it seduce you into its perversions. Let the monster consume you into your darkest desires. Let it plant its Seeds.