Review of “Thoroughbreds” by The Headless Critic 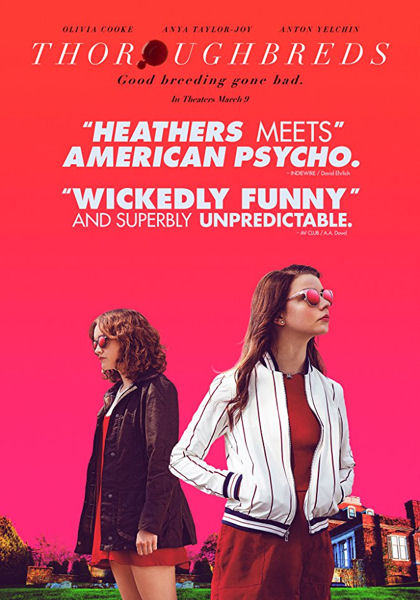 Doctors aren’t sure what to do about teenage Amanda (Olivia Cooke) not being able to feel emotion. Sure she gets hungry sometimes and she’s learned to act like everyone else but anger and love just don’t process. That doesn’t mean she’s any more dangerous than the next person, she just has to work harder at it. She supposes that scares those who have feelings. Doctors just throw a bunch of pills at her in vein of an accepting diagnosis. Photos just leaked of Amanda murdering her thoroughbred horse (Odin Lowe). Now she’s facing animal cruelty charges and her mom has had to pony up double the cash to get Amanda the tutoring she needs. It turns out her tutor and childhood best friend Lily (Anya Taylor-Joy) is searching for a way out and tutoring money isn’t going to get her there. Amanda just might though. “Two upper-class teenage girls in suburban Connecticut rekindle their unlikely friendship after years of growing apart.” Together, they may be able to solve both of their problems.

An emotionless black comedy with heart that’s lead by its thoroughbred performances. Olivia Cooke is exceptional as the emotionally stunted but fakes it well Amanda. Her blossoming friendship, if you can call it that, with Lily almost feels like love, in a deranged way. Anya Taylor-Joy plays the high-priced perfect Lily just as flawless as her character falsely portrays her life to be. Amanda comes into this friendship admittedly the impassive one but Lily proves herself to be the true sociopath. Though the film is built on the girl’s friendship, Paul Sparks plays a crucial role as Lily’s stepfather Mark just as well. Mark is just the right amount of unlikable and that’s the most simplistic and accurate way to describe how impeccable the character is portrayed.

I’d be remised if I didn’t mention Anton Yelchin in what would sadly be his final role before his untimely death. I have always enjoyed Yelchin’s performances since I first began recognizing him as a child actor in Hearts of Atlantis. He’s an actor that always stood out no matter if he was in a small role or playing the lead. His final role is no different. Yelchin brings the majority of the comedy in this “black comedy” with a performance that could have easily made this movie lose its seriousness if he was too bumbling or unrealistic. He landed the character just right.

Usually when a film comes up from a first time director, heading their own pet project that they also wrote, it’s for a movie that barely gets any exposure. Cory Finley’s emotionless masterpiece did so well at Sundance and on the film festival circuit it’s been picked up for a wider release and deservedly so. Production values on this indie feature are studio flawless and the film is made by its performances. I see so many great films that never get a chance as a wide or even limit release in theaters. This is one that got a chance. It’s better than 9 out of 10 movies playing in the same theaters. Get out and support this movie so Hollywood knows there are fans out there who like quality filmmaking with passionate people instead of just the same studio box office, cookie cutter stuff we've seen before.