Review of “The Strangers: Prey at Night” by The Headless Critic 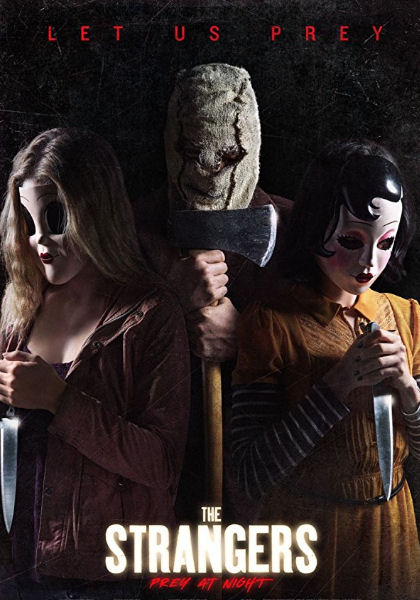 A family getaway to a lakeside retreat is ruined when The Strangers arrive. Kinsey (Bailee Madison) is having issues at home. Before her family ships her off to boarding school in hopes of correcting her behavior, her father (Martin Henderson) plans a family retreat to his wife’s (Christina Hendricks) family lakeside getaway. A fathers hope to bring his family closer together will end up forever tearing them apart. The Stranger Prey at Night and it’s night time around here. Why does anyone kill? Why not? The game in on…

“Let us prey”... Thee, O’ Lord, thy grace into our hearts shall we not be stabbed tonight; that we watch the reincarnation of The Strangers. Thy sons and daughters of sequels was made known to us by the message of Johannes Roberts. May by his passion and art be brought unto glory his resurrection through the creator Bryan Bertino be a success. Amen.

A decade removed from theaters The Strangers return to terrorize another family in a “Based on True Events” story. Let us Prey turns over the directing reigns to Johannes Roberts who helmed 47 Meters Down and several straight to video horror releases. Series creator Bryan Bertino stays aboard as a co-writer and producer for the sequel to his creation and biggest success to date. The end results is a conflicting mixture of horrors.

An excellent score leads us into The Strangers: Prey at Night, a studio professional production that keeps things practical with wonderful actors and key scenes of scary cinematography. It’s also horribly cast with scenes shot for imagery alone instead of portraying realistic horror. It’s the most cliché horror film I’ve seen in ages. I honestly thought we’d moved past this but apparently not...

Lead actress Bailee Madison is absolutely amazing. She proves herself worthy to be the next go to final girl in horror. She doesn’t show herself as a “Scream Queen” proving far more realistic in natural reactions to your life being threatened; perhaps becoming horror’s first Cry Queen or Silent Scream Queen? She was also horribly cast as wannabe “punk” teen Kinsey. Even as a rebellious teen it’s a stretch that doesn’t fit well. Her “barely in college” age brother is played by Lewis Pullman, son of famed actor Bill Pullman. He’s in his mid-twenties but unfortunately shows signs of maturity that should never allow him to play a college age kid. I would have found him a nerdy older twenty-something that wanted to sleep with the younger girl far easier than I found them family. Their parents are played by Martin Henderson and Christina Hendricks, both wonderful actors. Henderson fits closest to his chosen role and does an excellent job of panic and terror. Christina Hendricks’ casting was obviously meant to be reminiscent of Liv Tyler’s original role in The Strangers. She attempts to play “cool mom” but she never comes across as anything motherly.

The Strangers goes from middle class to white trash in its first sequel. We’re taken from a loving couple vacationing in a nice home to a family retreat to a trailer park? I suppose families vacation to lakeside trailers but this is something I’ve never heard of or thought existed and wasn’t explained very well as a set-up of uncommon knowledge. The original captured a glimpse of realism with a wonderful opening and though things slightly fell apart as The Strangers entered it was late enough that you cared for the characters’ lives. The sequel is Hollywood in every way. Before you get to know the characters they start dying. A nice cast, even horribly cast, is the only saving grace to make you care. Horror clichés are a test of patience for anyone who has any experience with the genre.

The kills are limited but effective. The mass blood loss in the pool was satisfyingly exactly what I wanted at the moment. Not all of The Strangers surviving was the greatest thing about the sequel except for the cast. Though characters are miscast the actors portray traumatized very well. Bailee Madison and Martin Henderson were especially effective. Lewis Pullman would also make a good leading man in a more adult oriented role.

Every time the characters separate, one is attacked and dies or nearly dies. Stabbings are the only form of death which would be brutally realistic if this ever seemed like anything other than a movie. Scenes are setup without a logical reason for the actor’s actions. A protagonist literally holds a gun to the killers head at one point and doesn’t pull the trigger in one of the most frustratingly unrealistic moments in cinema. The movie is so cliché horror the lead character is injured at one point where she literally falls while running. Though she has to hide to survive because she can’t walk any further, she has no problem walking just moments later while being chased by the truck. The only reason for someone to run down the middle of the street when a truck is chasing them is for the visual. The only reason to crawl down a bridge is for the visual of the truck following. The only reason for a burned person to get out of the truck when they can easily run over who they were chasing is for the visual. It made zero logical sense for human actions leading to the exact definition of cliché when the actor falls from his knees, face planting in “death” until he comes back from death for a second finale.