Review of “Bus Party to Hell” by The Headless Critic 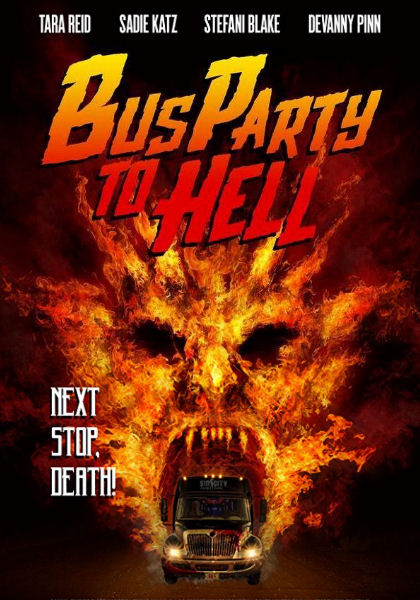 When they get back they can sue the bus company for all it’s worth. They just got to get back first. A Las Vegas Party Bus headed to Burning Man is full of young adults who just want to have fun. It’s also carrying the Chosen One. Hell and Vegas meet on a desolate, desert highway when the bus breaks down and the Satan worshipers swarm. This Party Bus took a wrong turn straight down a highway to hell. All hell just broke loose, literally. It’s a fight for their lives to save their sinful souls.

The desert is a barren wasteland of rock, sand, Satanists and mummies. There’s so much sand, it’s like one giant litter box. This litter box is about to be piss full of blood. When the bus breaks down a massacre of human sacrifice ensues and the survivors hop back aboard the party bus fending off the dangers of the desert. One of their own isn’t what they appear though. Now they’re trapped inside their party bus with something far more evil than anything in Sin City, a virgin. This bus party has gone straight to hell.

Softcore skin flick director Rolfe Kanefsky brings boobs, blood and a body count to the big screen in a Syfy original worthy production in Cinemax form. Seriousness isn’t even considered and it’s a better film for it. The usual budgeted CGI that accompany these features is limited in Kanefsky’s Las Vegas lust in the dust project. Cutaways and cheap props make for more fun including one of the worst looking CGI decapitations that I actually enjoyed.

I can’t help but feel like the cast is made up of strippers and whoever was handy in Vegas on filming day. They all die well though. We also get fun cameos from Tara Reid, who really hates dummy mummies and Sadie Katz who delivers these kids to the gates of hell as well as delivering a fun performance. Late night SyFy fans are the key audience to hop aboard the Bus Party to Hell but this one is lighthearted enough that even a jaded CGI stickler such as myself had fun with this comedy of horrors.