Review of “4/20 Massacre” by The Headless Critic 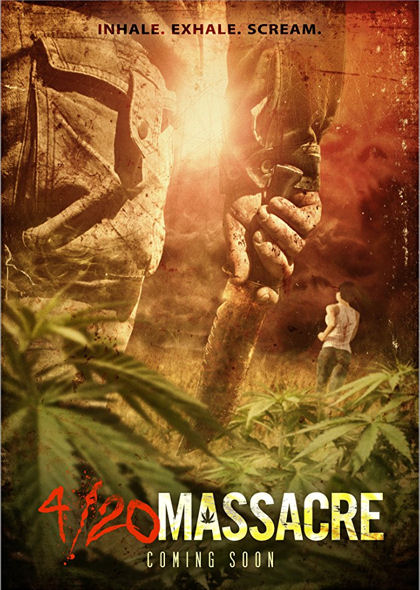 A group of five women celebrate one friend’s birthday by going on a camping trip to a national park. April 20th isn’t just for birthday celebrations. The girls make the mistake of a lifetime when they stumble onto a pot farm in a secluded part of the woods. Sticky fingers for sticky icky draws the attention of the murderous maniac posted to protect the product. The green stains red as these potheads lose their heads. Can any of them survive? They say marijuana has never killed anyone, they were wrong. Pot has never been deadlier than on this 4/20 Massacre.

Okay, let’s break some clichés. We’ve seen plenty of stoner movies and we’ve seen even more horror movies in the woods. What we haven’t seen is a stoner horror movie in the woods. Even more impressive is while 4/20 Massacre has comedy it manages to stay serious enough to not be a spoof of either genre. Most “stoner films” involve a group of young men. This massacre is gender biased for fallopian tubes. There are hundreds, maybe even thousands, maybe even hundreds of thousands of slasher movies set in the woods each year. Keep in mind that those numbers are strictly based on feeling and not facts. Nine out of ten of those wooded slashers are hillbilly based murders. This 4/20 Massacre isn’t even inbred. Don’t worry, not all clichés are lost. Sex and drugs will still get you killed, even on 420.

It’s obvious from the first toke of this film it isn’t the high priced movie you’d get for a bigger budget to spend. This lower quality skunk will still help you relax, have some fun and get the job done. The limited outdoor setting helps on production values with cinematography looking like a studio production. Performances vary but are better than most horror on a budget. The kills are the real star of this slasher. These girls don’t “fall on their sword” but one may just fall on her bong. Okay, perhaps she was force-fed her bong but that's semantics.

“Inhale, exhale, scream.” Writer, director Dylan Reynolds attempts to reproduce a Hatchet level of fun with over-the-top kills and characters. Budgeted CGI blood and some choice actors does ruin a lot of that. Blood is something that could have easily been done practical and it would have looked so much better. My favorite character dies first in the most dope kill. Which is never good for a movie with a low body count. This 4/20 Massacre could have had so much more fun dying.

“I don’t fuck around when it comes to the ganja.” So forget St. Valentine’s Day for massacres, 4/20 is what you need. These girls don’t need overpriced flowers and candy; they’re going to smoke up for their favorite holiday. Unfortunately cupid’s arrow is going to him them right in the leg though. Puff, puff, pass the word around about this horror comedy it’s a dime, bag of fun. Perhaps it’s best enjoyed why you’re at your highest. Mood of course.