Streaming Review of "Athena"
by The Headless Critic 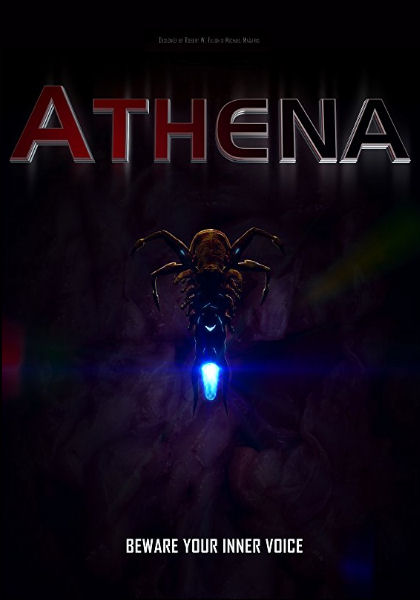 Everyone has that voice in their head playing devil’s advocate for decision making. That little voice constantly disagreeing, disapproving of every decision we make. The over thinkers curse of criticism, constantly stressing over everything said and done. It’s like a little bug crawling into your head, feeding on you, trying to make you do its bidding. Of course we listen, we have to listen, it’s in our own head after all. How do we know the difference between its thoughts and our own? We can’t get away from it so why even try? Let Athena (Mahri Shelton) take over. She has our best interest at heart. She is us and we are her. She wouldn’t hurt us. God it hurts...

You never know the struggle within someone else’s head. Hell we barely understand our own. Carl (Matthew Ewald) is that inner thinker who just can’t seem to get a clear thought. His life was at rock bottom when Athena came to him. Now he can’t live without her. She’s his purpose, but there’s so much blood. Are the voices within Carl his own? Is it schizophrenia, multiple personalities or just Athena? Is he alone?

This budgeted feature is a mixture on production. Acting ranges from killer to cringeworthy with the best performers generally being cast well as leads. Vanelle joins Matthew Ewald in the better performances and lead roles of the film. Cinematography and sound are equally as mixed. Sometimes appearing amateur with low camera quality that’s zoomed in too tight, while other scenes are more professionally shot. Audio is also uneven. The inner voice of Athena isn’t subtle but when actors turn their back to the camera their voices sometimes fade.

Making up for production values is a wonderful concept. Inner speech gets its own voice in writer Michael Louis Calvillo’s first feature script. It’s an original piece of horror that’s as layered as human thought process. Calvillo opens an exciting door to new thoughts of horror. Athena infests from the eye of first time feature director Robert W. Filion’s literal take on a story that could have been left open ended. Convoluted storytelling bounces back and fourth between characters sometimes feeling like multiple shorts connecting into a feature.

I enjoy the parasitic host and buckets of blood that follow. Surprisingly good CGI insects were a lot of fun and you will rarely hear me compliment CG. Bug insertion and dislodging is absolutely my favorite part. The blood flows from Athena. Whether it’s a blood soaked pillow case in the morning or Carl’s nose that never seems to stop bleeding, I enjoyed every ounce of blood shed on this film.