Streaming Review of "Spent"
by The Headless Critic 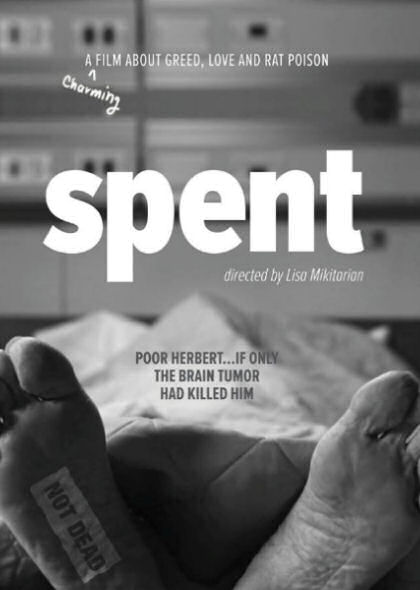 If only poor Herbert had stayed dead... Evelyn Shumacher (Connie Lamothe) and her adult son Lonnie (Darren Barzegar) are finally free of the penny-pinching tyranny of their husband and father Herbert who wouldn’t even let them turn down the air conditioning, even on the hottest of days. Now Herbert lays in a coma on his deathbed. Though his life savings isn’t technically theirs just yet, they’re both itching to finally spend just a little of the family wealth. Lonnie is going to buy that sports car he’s been eyeing for years and finally get the girl of his dreams. Maybe he’ll even quit his job at the movie theater making minimum wage! Evelyn is going to buy all the jewelry her husband never got her when he was alive. She also might get something else from the jewelry salesman that old Herbert wasn’t giving her at home either! As their day of freedom from frugal finances approaches upon the death of the family patriarch, Herbert Schumaker (Nick Nerangis) awakens on their Independence Day. Evelyn and Lonnie are torn from their brightly colored new world and thrown back into a black and white existence under a cheapskate. Poor Herbert, if only the brain tumor had killed him...

A black comedy that revolves around death, Spent is “A Charming Film About Greed, Love and Rat Poison.” I absolutely loathed Spent the first time I watched it. It was a tedious effort I had to force myself to sit through. Mel Brooks meets Leave it to Beaver in this uncanny valley of a film that I just wasn’t sure what to make of. It was so bad, I wasn’t even going to review it and I happily review anything horror related even black comedies. Another offbeat comedy that was unlike anything I’d ever seen and I also didn’t like the first time I watched it was Napoleon Dynamite. Both movies stuck with me until I re-watched them. Upon its second watch Napoleon Dynamite became one of my all-time favorite comedies that I’ve now seen more times that I can count. The second time I watched Spent I found it “A charming dark comedy with a vintage vibe” which isn’t just its tagline.

No one can deny Spent has beautiful and memorable cinematography, using vivid colors accentuated by use of black and white. The sets recapture the feel of the small screen sitcoms of the 1950’s that we all grew up with. That’s something that big budget productions of sitcoms turned Hollywood movies haven’t even been able to capture. Wooden performances I deemed “bad acting” the first time around were realized to be a brilliance of directing upon a re-watch. They really make this movie.

Newcomer Nick Nerangis gets no respect for his performance as Herbert. Nerangis must have channeled a PG version of Rodney Dangerfield’s spirit with his borderline racist, stereotypical Jewish character that’s so over the top he steals the show. Herbert’s frugal ways are making everyone miserable yet he's the upbeat character of the film. It’s a shame more people aren’t talking about this comedic portrayal. No respect I tell ya, no respect. Like Nerangis, out of nowhere Connie Lamothe gives an excellent and memorable performance in the female lead. She portrays a mother better than you’ll find in most features of a bigger budget, both looking the part of a real mother while staying sensual in the role. The deadpan delivery of everyone in the film is so steady it’s something I’ll attribute to first time feature director Lisa Mikitarian. Lamothe still stands out as someone who could play a similar role in films of varying styles.

Though I referenced a legendary director, a cult favorite comedy and an iconic sitcom, nothing I’ve seen really compares well to Spent. I believe this is why I had to watch it twice to appreciate it. I’m still not sure I wouldn’t love it more the more I watch it. Regardless Lisa Mikitarian accomplishes a unique movie that I don’t just recommend you watch, I recommend you watch it over and over. It may take two tries for Spent to find its audience but it certainly found me.