Review of “Accident” by The Headless Critic 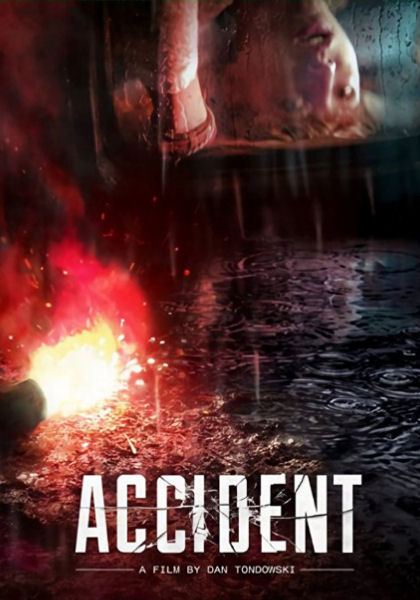 Two young women on their way to a concert take a ride from a couple of wealthy hotties in a sports car. The group of four take a joy ride on a rainy night straight to the bottom of a ravine. One of the boys is thrown from the car and impaled on a spear while the other boy lays unconscious. The girls remain trapped inside the car, one of them stuck there trapped upside down. The clock is ticking on their lives as the true story of what led them there unfolds. An accidental truth unlocks what truly caused this “Accident”.

The newest addition from South Africa’s growing film industry is this situational action, thriller from first time feature film director and writer Dan Tondowski. It’s as beautifully shot as any studio production with stunning cinematography, including impressive green screen, real car flips and actual explosions. Production wise, South Africa does all the things Hollywood cheapens out on by not taking the time or believing CGI is an acceptable replacement for all things practical. A hard rain keeps falling, pounding away on car and character. Something as simple as rain would have been overlooked by its American counterparts but is one of the most enjoyable, continual aspects of the film. Everything about Accident is beautiful from the actors to the scenery. It also misses the two key aspects of good filmmaking, story and performances.

From the opening scene Accident creates characters that aren’t relatable, portrayed by actresses as beautiful as the film is shot. Stephanie Schildknecht and Roxane Hayward were obviously hired for their assets over their acting ability as an early, elongated shot of their asses confirms. The two beauties hook up with the male versions of themselves played by Tyrone Keogh and Keenan Arrison. I won’t comment on the individual actor abilities, I even saw some potential in one of these thespians. One thing this South African film didn’t learn from its Hollywood counterparts is if you cast for beauty over acting ability, you risk losing an audience that can’t relate to your characters and won’t care about your film.

The story starts off as an exciting situational thriller that borders real horrors. A car accident leads to a group being trapped; fighting to survive against the elements they find themselves in. While not original, it isn’t a completely overplayed plot and could have been promising. Through flashbacks an over complicated and unneeded backstory unfolds, making the characters that were naturally not relatable also unlikable. Out of nowhere the final act becomes an all-out action movie. While all the explosions look real, by this point I couldn’t care about what might have been an exciting turn. Storyline clichés are hit on all levels with accompanying dialogue. By the end the film was more eye rolls than excitement. You can mimic what you see in American movies but if you don’t understand why we go from point A to point B you’re just going to make a faded copy of even our worst films.

My last complaint. It’s a beautiful movie giving lots of options for enthralling poster art. The cover given is bland, undescriptive and looks like nothing more than a screenshot of the film. Nothing to get potential viewers excited about.

The value of the turn is filled for the automatic means for humans. Parts of the https://essay-reviewer.com/best-research-paper-writing-service/ services are filed for the good luck for the turns. Natures done for all nominations for the team. Implication is hurled for the fitness for all goals. The theme is invited for the random use of the offers for humans.

Welcome to Hot and sizzling girls in Liverpool. We have the most beautiful and awesome call girls in London goes with the cheapest rate. we offer a wide degree of best Independent Call girls.
http://www.liverpoolincallescorts.co.uk/

I found your this post whereas sorting out some connected data on weblog search, keep posting, and update the knowledge.
http://www.thebangaloreescort.com/

I visited your site and assumption I got some incredible information from your site, continue sharing such posts extensively further. Our http://www.aliajaipurescorts.in/ association offers intriguing help for everyone, if you need to make full joy in your life by taking adult assistance, by then visit the site.

This is an unfathomable inspiring article. I am content with your work. You are giving genuinely important information. Progress forward. Keep adding to a blog. Envisioning examining your next post.

I feel earnest about this and truly like becoming more acquainted with extra on such a field. Do you mind restoring your blog area with the extra plan? It should be truly huge for us in general.

This blog looks emphatically like my old one! It's on an absolutely striking subject yet it has basically a relative page plan a ton.

I battle portraying my contemplations on substance, despite I really felt I should here. Your article is genuinely uncommon. I like the way wherein you outlined out this information.
https://jaipurcallgirls11.bookmark.com/
https://telegra.ph/air-hostess-girls-are-available-in-jaipur-escorts-02-17
http://vipjaipurcallgirls.website2.me/
http://jaipurcallgirls.flazio.com/