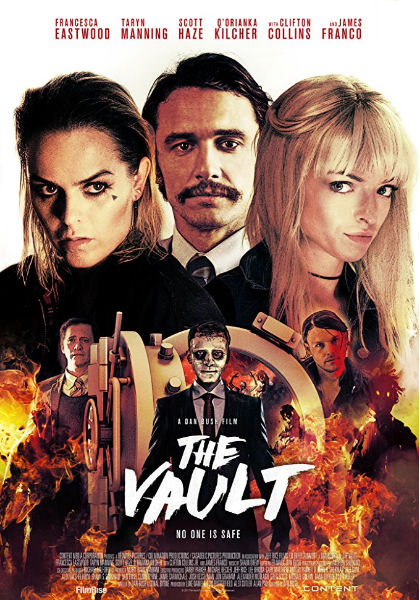 In order to save their brother, two sisters rob a bank. Methodically planned by amateurs, the sister and their crew overtake the bank. The hostages are all at bay, the money has all been taken and it’s time to exit before the cops show up. When their loot is counted the cash doesn’t add up. The half a million dollars they thought they would get, isn’t even six figures. As everything starts to fall apart, a man steps out of nowhere offering up information on where the real money is kept. Little do these unsuspecting thieves know that unlocking The Vault below will open up a whole new world of horrors where “No One is Safe”.

Director Dan Bush’s latest addition to cinema is an action thriller with a wicked turn. James Franco leads a talented cast that includes Orange is the New Black’s Taryn Manning and second generation actor Francesca Eastwood. Eastwood continually impresses me the more I see her. This bank heist movie opens up a vault of horrors in its second half. Not seeing the horror genre label going in, what appears to be an action, drama shockingly becomes something else. Those looking for a bank heist, action flick might be turned off by such horrors unfolding while anyone going into this vault looking to be scared might not want to sit through the first half heist. I personally didn’t mind either. What I do mind is its execution.

The script is a fun mix of genres and a great concept but something got lost in translation to film. The first half is excellent as a bank heist action movie and that’s coming from a headless horror critic. The horrific ending left more to be desired. Everything in The Vault is made well expect for a key piece that's amiss, the twist. It was very predictable and the death that followed was not as fulfilling as I would have liked being a horror fan.