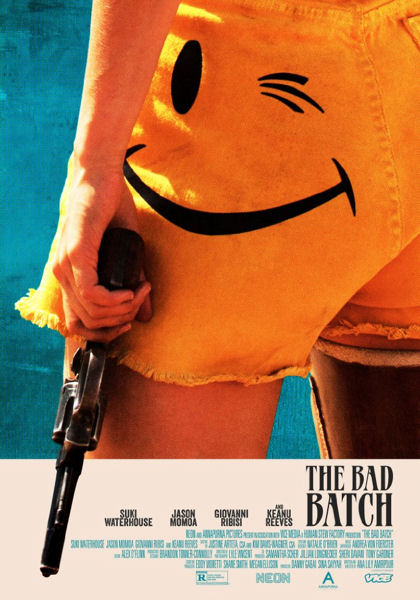 In a dystopian future, a young woman Arlen (Suki Waterhouse) is released from her protective prison into a desert Texas wasteland known as the “Bad Batch Zone”. The sun isn’t the only element out here you have to survive against. The real bad batch awaits her in the people of this dessert. In a barren world where survival is everything, one wrong move could cost you an arm and a leg. Perhaps even your life.

In 2014, a British director took to a crowdfunding campaign to turn her short film into her first full length feature, funding a low budget, black and white, arthouse horror flick that pleased audiences and critics alike. She follows that up by going Hollywood. Ana Lilly Amirpour’s successful indie effort earns her a couple of extra zeros at the end of the budget on her second film. A cast of up and coming stars along with some established cameo’s no doubt set The Bad Batch up for a box office release it would barely see.

Ana Lily Amirpour brings her arthouse eye to soulless Hollywood, making a beautiful film that studios just couldn’t market. She trades in the black and white camera from A Girl Walks Home Alone At Night, replacing it with bright colors and the shining desert sky of The Bad Batch. Her filmmaking style remains with long still shots and the minimal dialogue studios tend to find unmarketable for no good reason. Her stylized effort is just as forced in color as it was in grey but an artist in never wrong for trying to create beauty.

The Bad Batch is sold on sex appeal and cannibalism. The beautiful Arlen must walk through musclebound cannibals to get to the other side of God knows what. She doesn’t make it without giving them a taste. Amirpour attempts to shock with severed limbs she covers in shit and a romance story of a young girl who falls for the first man to eat her. Her art is cheapened by becoming a Hollywood creation. The casting of beauty over ability in Jason Mamoa and Suki Waterhouse doesn’t help. It’s not that the picture perfect actors aren’t good but by casting them you aren’t exactly easing in from Indie to L.A.

The true shock in The Bad Batch is Jim Carrey’s almost unrecognizable cameo. The immortal Keanu Reeves also gets a guest spot that he runs and has fun with. Homeless-vagabond Carrey only gets a glimpse of screen time and without looking for the famed actor you will miss him. While dropping names I’ll also nod to Giovanni Ribisi who does what he does best, playing an unintelligent eccentric in another small role.

The Bad Batch isn’t bad. The opening even scratches the surface level of a Tarantino type shock and awe. The first twenty minutes makes for an excellent horror short. As the movie progresses, the largely wordless feature struggles to find its story to tell. Artistic scenes on a Hollywood scale are there. A tale of amputated revenge in an all-consuming case of Stockholm syndrome seems to lose a little focus. This colorful copy of Mad Max rides into the sunset on a scooter instead of a Falcon, coming up short in the second half and dimming in the finale.