Review of “Unsane” by The Headless Critic 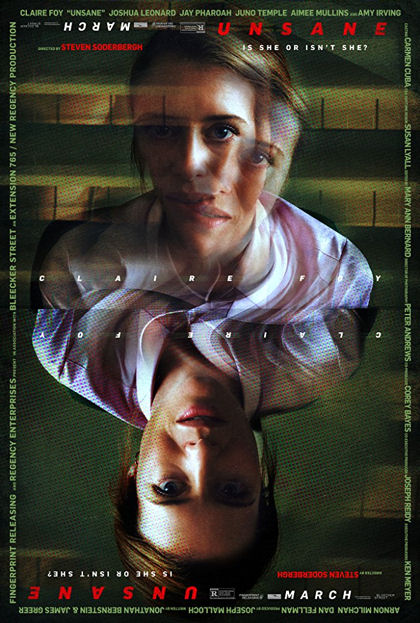 “I never knew what being alive was until I saw you.” Sawyer Valentini (Claire Foy) just needed someone to talk to. After experiencing some problems in Boston, she’s moved 450 miles away, leaving her life and mother behind to start anew. Any single woman in a new city would have her concerns, especially if she moved there to escape a stalker. Venting to a counselor, Sawyer signs the massive amount of paperwork you’d expect with any doctor visit. She didn’t realize she’d just voluntarily committed herself for psychiatric evaluation. Or did she?

While confined to mental incarceration, Sawyer uncovers a conspiracy within the hospital who's filling their beds, committing sane people like herself with good insurance to turn a profit off of. Or is that just the story of a crazy woman? The hospital extends her involuntary, voluntary stay for increasingly violent behavior towards a staff holding her against her will by throwing mind altering medicines at her. Sawyer’s dire situation becomes more serious when the stalker (Joshua Leonard) she moved to hide from starts working as an orderly, having assumed the identity of a hospital worker. Coincidence, a severe case of stalking or is this simple insanity? “Is She or Isn’t She” Insane or Unsane?

This isn’t one that flew over the cuckoo’s nest, this one barely flew into theaters and for a reason. For a fairly wide cinematic release, cinematography, sound and lighting are beyond amateur. Whether experienced director Steven Soderbergh shot this film entirely on his iPhone to make a statement, for the effect, a challenge, sponsorship or it was due to a limited budget, it doesn’t matter. The movie released looks like cheap moviemaking and something completely unacceptable on the big screen. Impress me all you want with your homemade phone films when they’re free online. When you’re charging me admission I expect professionalism. While production values are non-existent for a movie with a reported budget of over a million dollars, performances are good in an otherwise ruined film. Matt Damon even has a cameo perhaps doing his Ocean’s director a favor or maybe he's where the budget was spent. It certainly doesn't otherwise show onscreen.

The concept of script and Claire Foy’s performance make this film. “Larry the Cable Guy: Health Inspector” writers Jonathan Bernstein and James Greer actually produce a script with great potential teetering on the brink of insanity. Morals of hospital fundamentals are put into question as we slowly explore the reason for one patient’s committal. Soderburgh slips off that teeter-totter slowly leaving the audience on the other side resting comfortably at ass level instead of jumping off quickly with a shocking plunge to the ground. Claire Foy picks up a lot of what’s left to be desired in a standout performance of a woman with questionable sanity. Supporting roles by Joshua Leonard, Jay Pharoah and Juno Temple are also fun and solid. While some smallest roles also come off amateur, most of the cast does well with fun characters they could play with.

“You’re only delaying the inevitable Sawyer.” Perhaps I would have enjoyed this movie more if it were as widely advertised as being shot on an iPhone as it was widely distributed to theaters. With better production values and a little bit more concealing of script, a better movie could have been made. Acting almost saved it peaking at Claire Foy’s strong, thought-provoking dialogue while in solitary confinement where she may or may not be alone. “What medicine are you on?”

“Sawyer you’re always on my mind. I love you always and forever.” –The Headless Critic