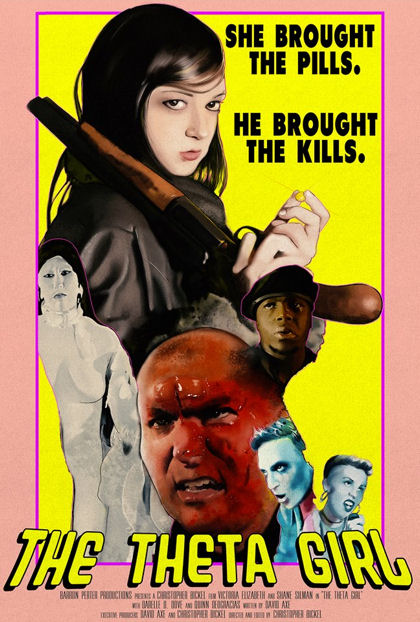 Theta is the newest “it” drug. It’s said to not only give you a high but some believe it to be the gateway to heaven. Gayce (Victoria Elizabeth Donofrio) is a Theta slinging badass who’s ready to help you reach the pearly gates. When her friends and clients start turning up dead, it isn’t Theta killing them, it’s murder. Be it Holy Roller or grim reaper knocking at her door, this take no shit, little punk chick is gonna fight back. “She brought the pills, he brought the kills” and it’s a thrill ride to survive.

Made for a reported fourteen thousand dollars, this debut feature from Christopher Bickel and David Axe is a B-exploitation film in every sense. There’s more full frontal nudity in a simple walk through the house than there is in an entire year of Hollywood theatrical releases. Bloody murder isn’t much better. Cheaply filmed and it shows, Bickel and Axe embrace their filmmaking limitations, pulling out all the blood, guts, tits and dicks that’ll get them noticed. Underneath is a stereotypical portrayal of Christianity versus sin. It’s a ludicrous enough representation not to offend. Hippies on the other hand, they may just protest their depiction.

I appreciate the throwback 70’s exploitation filming style. Those movies are largely forgotten for a reason though. There isn’t enough nudity, gore or topic tackling script that can cover up this cheaply filmed, cheaply acted and cheaply exploitative feature. That doesn’t mean they don’t have fun and it doesn’t mean these types of films don’t have their audience.