Review of "Friday the 13th Part 2" by The Headless Critic 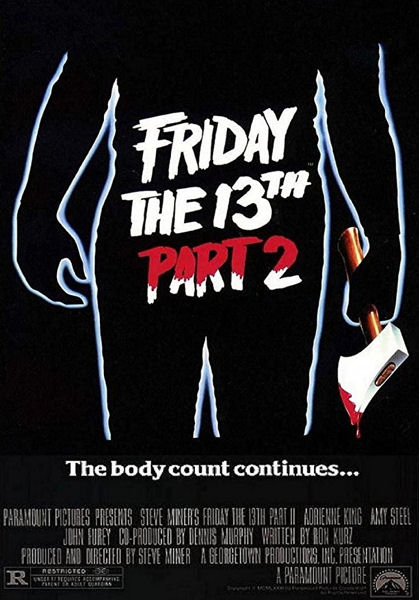 "I don't want to scare anyone but I'm going to give it to you straight about Jason. His body was never recovered from the lake after he drowned. Now if you listen to the old timers in town they'll tell you he's still out there, some sort of demented creature surviving in the wilderness full grown by now, stalking, stealing what he needs, living off wild animals and vegetation. Some folks claim they've even seen him right in this area. The girl who survived that night at Camp Blood that Friday the 13th, she claims she saw him. She disappeared two months later, vanished. Blood was everywhere. No one knows what happened to her. Legend has it Jason saw his mother beheaded that night, then he took his revenge. A revenge that he'll continue to seek if anyone ever enters his wilderness again. By now I guess you all know, we're the first to return here. Five years, five long years he's been dormant and he's hungry. Jason's out there. Watching. Always on the prowl for intruders. Ready to kill, ready to devour. Thirsty for young blood."

"Jason, mother is talking to you!" This Friday the 13th a group of camp counselors in training at the local Packanack Lodge begin getting a little too close to Camp Crystal Lake. Someone isn’t happy about the wannabe counselors encroaching on his lake. His mother is dead and he watched it happen. They did it. They all did it. Heed the warning as your arrive to Camp Crystal Lake or you won't survive training camp. “You’re doomed, you’re all doomed.”

The Friday the 13th series is my favorite slasher franchise. While I know they aren’t all the best slasher movies, they hold a special place in my bloody heart. The follow-up sequel to Friday the 13th switches killers from a surprise mother, to a surprisingly alive son. The first sequel plays off the original with a largely unseen killer and big reveal. But how does it measure up to the rest of the series? There are an appropriately numbered thirteen keys to Friday the 13th success. In no particular order…

1. A High Body Count: Friday the 13th part 2 has the absolute lowest body count of any of the series while having one of the largest casts of throwaway teens that could have died. If ten kills doesn't tickle your fancy this Friday the 13th, you certainly won't like that two of them aren't even shown. Edited out or left to the imagination, only eight confirmed kills can we attribute to how they died.

2. Bad Acting: Crazy Ralph (Walt Gorney) alone is enough to meet the bad acting quota for the entire film. Sadly we get to see him for the last time on Friday the 13th. It isn't bad acting as much as it is unbelievable dialogue and character reactions in part 2. One of the best casts in the early series perfectly portrays their hapless, oversexed, teen characters unrealistically well. We're also treated to the Dukes of Hazzard worthy Deputy Winslow (Jack Marks), loves to laugh a little too much Jeff (Bill Randolph) and over-the-top nerd done stereotypically right Ted (Bill Randolph).

3. Camp Crystal Lake: Camp Crystal Lake has been closed for five years. A group of teen counselors in training take up at the Packanack Lodge and are warned to stay away from Camp Blood. Luckily for us and unluckily for them, they don't listen. The first sequel changes up the setting just a bit but successfully so, showing us another side of camp and giving us a fat cop running through the woods.

4. Kill Mom Music: Steve Miner's first version of a Friday the 13th sequel evolves on the original sounds of Sean Cunningham and Victor Miller's series creating film while paying homage to their creation.

5. Teens Dying as they Deserve: Sadly we lost Ralph. Happily we lost the Sheriff. The other victims are teen or near teen victims. The large cast of counselors will make a gorehound wet, (with blood) at the thought. Unfortunately the large cast of teens mostly don't die but not to worry, not all of them will make it out alive. The best kill in the film is an emotional one as Jason extracts his revenge against Alice.

7. Boobs: In a Joe Bob Briggs form of counting boobies, we are treated to a lot of scantily clad teens but only one set of tiny titties. What we do get is one of the most iconic skinny dipping scenes in all of horror. The athletic body of a fully nude Terry (Kirsten Baker) may not be the ample bosom you're used to at Camp Crystal Lake but it's quality over quantity in part 2.

8. Stalking: While not quite as much as the original, the first sequel adequately pays homage, shooting several scenes from the stalkers perspective. We also get our Voorhees slasher randomly stepping out of nowhere for the kill.

9. Machete: The Machete is used sparingly but memorably. Whether it's slitting the throat of a kid hanging upside down by his feet in the bloodiest kill in the film or the impaling of the face of a cripple in a wheelchair, the machete has impact. There's also an unseen kill that just screams, machete!

10. Eccentric Deaths: An ice pick, a spear, a hammer, the classic knife, even a garrote and oh yes, the machete! The post sex double spearing has become classic horror imagery. The best visual though is the machete to the face of the unfortunate wheelchair ridden teen who then goes gliding down a set of steps outta nowhere faster than a priest in the Exorcist. For comedy value a hammer to the head of the worst character in the film should please all.

11. Even More Eccentric Body Reveals: As half the counselors go to town, the other half get murdered at camp. When the town counselors come home, they have bodies waiting for them. A purple faced Jeff, hanging from his sheet noose was excellent. The most blood seen in the film is from the bodiless bed reveal. The most iconic reveal of all happens in part 2 when our final girl finds the altar to momma's head. The Ms. Voorhees altar and her Alice sacrifice are horror imagery that can't be undone.

12. A Nemesis: The loss of one final girl in Alice opens up the role to another final girl in Ginny. Amy Steel makes a more realistic and capable nemesis but sometimes having the know-how, doesn't mean you'll survive.

13. A Killer Voorhees: An adult Jason Voorhees makes his first appearance in a Friday film as a mentally handicapped, bag over the head, pitchfork wielding, hillbilly killer. Jason has been living in the woods by himself for a long time hiding from society. He just got exposed to death for the first time by watching his mother get beheaded. That'll scar a boy.

So how does the second film tally up for a Friday the 13th movie? The body count is the lowest but the characters are focused on enough to make you care. Acting is actually good for a Friday film but the characters are so stereotypical you'll enjoy most of them dying. Part 2 has the right camp setting, the music and the continuity of timeline. Some actors are a little old for their roles but others come off as the youths they're portrayed as. This is the film that opens up why Jason kills and why his mother killed. This is the Friday the 13th that tells a story. It may be a fireside horror story but it's still a story.