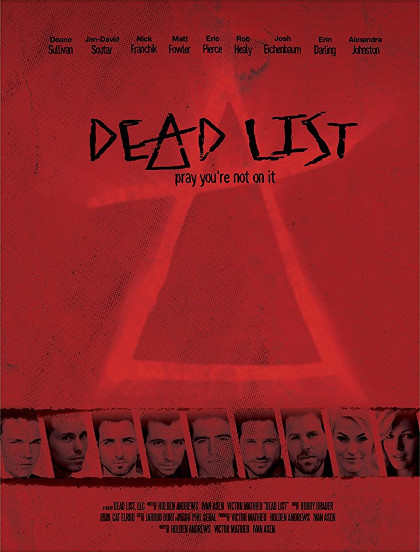 Limp-wrist, wannabe actor Cal (Deane Sullivan) who cries about his failed auditions, just had a book fall from the sky onto his car. This book is destined for him. You just made the list! Unwittingly, Josh and his actor buddy Trevor (Jan-David Soutar) set forth motions for a list of all their competition to die, perhaps even themselves.

Zander (Matt Fowler) made the list. A blacklist and a Dead List actor, Zander just turned black and dead.

Scott (Nick Bandera) is on the list. Unlucky him and unlucky us. Scott’s ears just keep ringing. The sound’s unbearable. Nothing that taking a drill to his cell won’t fix.

Jason (Eric Pierce) is a cheater whose made the list. Now creepy old bitches are following him home. That’s what cheaters get. Someone’s knocking at the door Jason. Confess your sins and let them in!

Kush (Rob Healy) isn’t really a follow the rules kind of guy. Looks like he's on the list too. Kush is pushing that kush. He’s also smoking it while catching some waves. Looks like he’s caught something else today. Predator becomes prey, pray you’ll survive.

Bob (Josh Eichenbaum) can be anything he wants to be. He’s out of snow and he wants to go skiing but there's no snow on the mountain tonight. He’s not clowning around but the clowns are... Ever play hide and seek with a clown trying to kill you? You can run but you can't not die! Like a little red balloon, everything comes full circle at the clowns.

"A struggling actor conjures a dark force in order to win a movie role", putting a little spark into his acting career. Production values are low in this micro budget indie anthology. The opening couple of segments in this anthology are honestly rough. Camera angles and cutaways are amateur. Just when I was going to give up on this collection of deaths, along comes one of the most fun, practical effect, body melting scenes I’ve ever seen. The segment “Kush” from writer, director and actor Holden Andrews stands out among the rest. While a little bit borrowed from Creepshow, the segment alone as a short would have been wonderfully reviewed. Oh excuse me, is that just a giant slab of my own skin that just fell onto the shower floor? Writer and director Victor Mathieu also includes two the better segments in “Bob” and “Jason”.

“A” marks the spot in this collection of horror tales. While it may not get a grade"A" it does get a passing "D". At the end of each one of these anthologies is murder. Pray you're not on the Dead List. "Gotcha Motherfucker"