Review of “Truth or Dare” by The Headless Critic 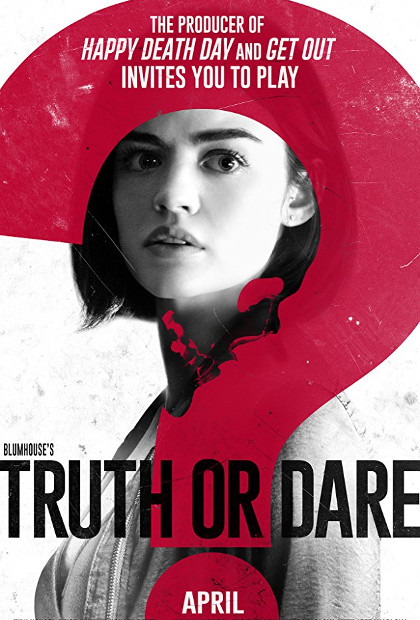 While Spring Breaking in Mexico, seven friends are unwittingly lured into a game of Truth or Dare with life or death consequences. “Tell the truth or die. Do the dare or die. Refuse to play and die.” The seven friends must continue playing a game “You Can’t Win”. As secrets come out and violent acts are enacted on one another, the group struggles to remain united as they try to figure out how to escape a game where the only way out is death. “Wanna Play?”

“First you play the Game then the Game plays you.” Olivia (Lucy Hale) is lured to Spring Break in Mexico by her bestie Markie (Violett Beane). Once in Mexico a cute guy Carter (Landon Liboiron) that she met at a bar lures her and her friends away to a beautiful but creepy abandoned building in the middle of nowhere. A place you’d only find in a horror movie. Carter convinces the group of young adults to play a drunken game of Truth or Dare. None of them knew that the game was real. Now they must tell to truth or die, do the dare or die. If they refuse to believe the game is real and they don’t take their turn, it’ll be the last thing they do before they die. They’re all dying to play.

Characters are created with no possible existence eluded to beyond what you see on screen. None of the characters seem real and every possible backstory on them is tied into a nice package by the end. Poor casting of characters like Ronnie (Sam Lerner) who looks like he’d be found in the AV club more than the stereotypical partying frat boy he played. Tyler Posey is cast as Lucas, who has all the girls panties wet even though his wolfboy hairline and face that looks like he was a lifetime boxer doesn’t fit your typical definition of heartthrob. Sorry but, “The truth will set you free”. The cast still does a fine job with their surface level characters.

Full of scoff worthy, eye rolling moments, Truth or Dare is made well on production values but is laughable on every other level. The reported 3.5 million dollar budget is spent well and the CGI used is spot on. The slightly too wide to be real smiles the characters get when playing the game are creepily cool the first couple of times you see them. By the time Olivia is surrounded in the library but a hoard of smiling students, it’s overplayed to point it's ineffective. Realism of characters and decision making just isn’t to be found which is really where the movie gets lost. As the friends die off, those remaining launch an investigation into the origins of how the game got started and of course there’s a love triangle along the way. When one character is dared by a demon possessed game to sleep with another character I knew I was watching a “horror” movie made for tween girls. Which perhaps is where there audience is if they find one.

Blumhouse is a production company that’s supposed to be leading the way for consistent horror. After producing two of Hollywood’s best horror films last year in Get Out and Split I have higher expectations of Blumhouse than this. This one should have easily been seen as something the majority of their fanbase doesn't want. Those who find humor in bad movies might enjoy it though.