Review of “Tremors: A Cold Day in Hell”
by The Headless Critic 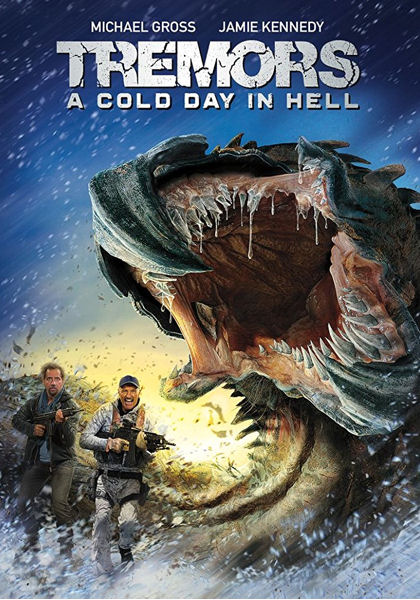 Global warming has just defrosted a Graboid in the artic. Expert Graboid hunter Burt Gummer is called in by Canadian researchers when their co-workers are killed on a remote expedition. The great white north isn’t equipped to handle the dessert dwelling, killer worms or their Ass-Blaster offspring. Gummer along with his own offspring Travis (Jamie Kennedy) must figure out how to stop the dirt worm as it burrows through ice. The creature known for its evolutionary abilities seems to have done it once again. Why is a sandworm in the artic and what are these mind altering side effects it seems to be causing? Out of his element, Burt Gummer may have just accepted his last Graboid hunting mission.

When a Graboid uncharacteristically appears in the artic, who you gonna call? Burt Gummer! Burt is back along with his illegitimate son Travis for the sixth installment in the Tremors franchise. The series has bounced from director to director and even from theatrical to tv, the one constant for all Tremor movies has been Michael Gross. The last two South African funded installments have found some kind of stability in returning writer John Whelpley, director Don Michael Paul and Jamie Kennedy co-starring alongside Gross. While the South African, CGI heavy copy may not have the same quality of image as the original, it’s still another Tremor movie that series fans should love.

I’m a Tremor series fan. When I Grab(oid) the first film I was thrilled with the Kevin Bacon, Fred Ward original. Realizing there were already sequels made me Shreik(ers). My Ass-Blasted off the sofa so quick to get them. I watched The Legend Begin, flowed with the Bloodlines to South Africa and even sat through the 13 episodic of a Sci-Fi series when I generally hate anything SyFy. Truth is Tremors hasn’t always been the best quality but that worm has dug deep into my heart as it has for many others.

While the original Tremors stripped down to it's underwear, A Cold Day in Hell isn't wearing any. The commando team from the fifth installment settle into their roles for Tremors 6 and it’s a better film for it. I don’t need a new setting for every Tremor felt but I still happily followed them to Mexico, through time, to South Africa and now the arctic. Evolution of the Graboid was a continual thing in the first three films, that picks back up in part 6. We're not given the next installment of an Ass-Blaster or even the underappreciated Shreiker, this Tremor has a psychological side effect. I went along for the ride and as the Tremor passed, A Cold Day in Hell may just be my favorite thing to come from the franchise since the original two, maybe three films. Yes, I have higher hopes for the series but I still guilty pleasure enjoy all things Tremors.