Review of “Gehenna: Where Death Lives”
by The Headless Critic 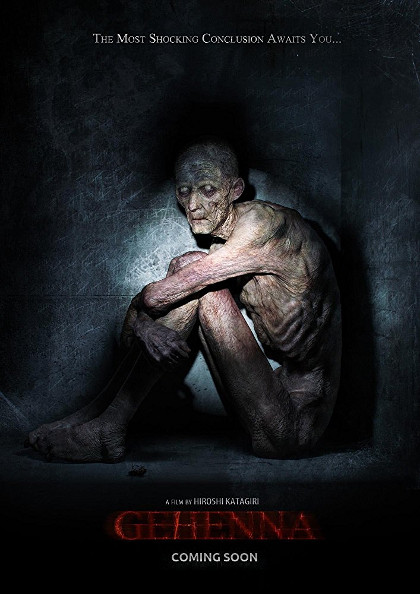 “…it is better for you to enter into life with one eye, rather than having two eyes, be cast into Gehenna.” –Jesus Christ Matthew 18:9

A company’s exploration for their next five star resort takes them to a remote tropical island destination that the locals know to stay away from. While exploring paradise, corporate and their hired hands uncover Gehanna, the destination of the wicked. Deep in a hidden bunker those who don’t die await. Advanced civilization meets an ancient evil as modern development becomes the death of you. If you live, you lose.

Gehanna is a mixture of Japanese psychological, suspense, horror meeting an Americanized Mummy tomb exploration with well defined, cliché characters. All from a first time feature director Hiroshi Katagiri whose of Japanese, American descent. Much like Japanese horror, imagery and supernatural characters are impressive and terrifying. In tradition with American fare, a group of stereotypical characters band together to die.

An opening scene set 450 years ago takes the face off any thoughts that this one won’t be gory. Effects are practical and excellent. Once trapped inside the bunker the dead come out and they look exceptional. Doug Jones gives a stand out performance as always, playing the Creepy Old Man this time around. From body scarring to face smashing Gehenna’s effects impress more than big budget studio productions and all for a reported quarter of a million dollar budget.

The budgeted film looks beautiful in the tropical island setting. The budget is shown as they reach the bunker which is limited and repetitive and takes up the majority of the film. Some less than adequate voice-over work on the car ride is also noticeable. Make-up effects continually impress but a simple bullet wound leaves a gaping hole for improvement.

Accompanying Jones is a cast of characters that are a bit cliché but not annoyingly so. Sean Sprawling in particular plays his comedy relief to sanity lost role well. The characters may be simple but no complaints on acting with a nice cast that includes, Eva Swan, Simon Phillips, Patrick Gorman and a wonderful cameo from Lance Henriksen. I even enjoyed the Ben Affleck-esq delivery of Justin Gordon. Stick around for the post credits with a little fun and potential sequel with Lance.