Review of “Cartel 2045” by The Headless Critic 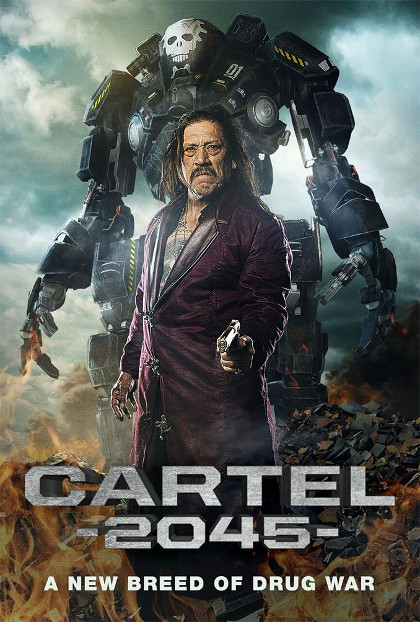 In the year 2045, the Cartel have overrun the city of Juarez. Cartel leader Angel Malvado (Danny Trejo) has just cut a deal that may help them rule the world. The one weakness of history’s greatest group of organized crime is there’s always someone trying to overthrow you, turn on you, shoot you when your back is turned. Malvado has just purchased the bankrupt company that designed the defunct robotic soldiers of the future. The next evolution of the Cartel does as it’s told because these gang members have programing and wiring.

In order to stop the Cartel before it’s too late the U.S. Army digs a disgraced Marine out of his prison confines. Chris (Alex Heartman) has a rare microchip from a banned technology embedded in his head. When active, this chip turns Chris into the ultimate weapon, defying the limits of the human body. Robot faces off with the synthetic evolution of man in a battle in Juarez to keep the world out of the control of the Cartel.

Ambitious writer and director Chris Le attempts to make a multi-million dollar movie for a fraction of the cost. He brings his first feature film to screen in a futuristic tale and attempted throwback grindhouse filming style. The result is a bit convoluted.

For the cost, the CGI and effects are impressive. Budget aside I still love the glitchy, mechanical movements of the robots. The evil robot counterpart in Alex Heartman’s Chris is even fun that I can go with in a voice within your own head and superhuman body movements and abilities. So for a twenty million dollar budget movie filmed on a million bucks, it wasn’t the effects or sci-fi set-up that lost me. The story gets bogged down in boredom, the characters don’t get you involved or make you care, acting is called in and the clean cut imagery with fake grindhouse scratch filming just doesn’t work. I like the attempt and some things do impress but the ultimate goal of any movie is entertainment and this one just didn't capture that for me.