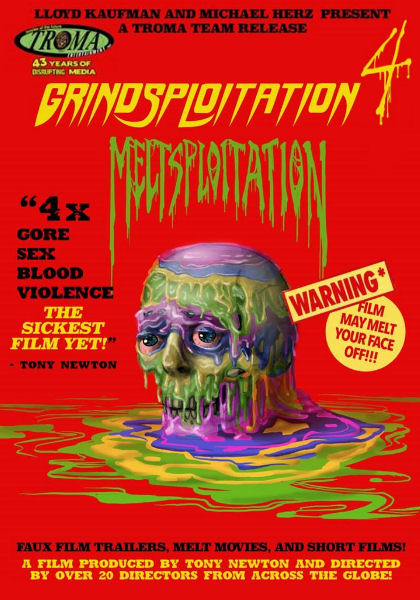 The most original racist pizza peel to smack a bitch to death in the face since the Giallo films of old. Tonight there will be “Spaghetti on Satan’s Blade”!
- Directed by Chris Dasinger & Sylvester Sletten

Ladies beware; this is the worst case scenario for a rancid money shot in the eye in a “Night of the Ooze” .
- Directed by Impatv

It came from beyond our galaxy. A place unknown to mankind. Infecting anyone who comes in contact turning them into a melting mess of morbid proportion. Melting not only the body but the mind. Sliming onto the silver screen this summer it’s “The Ooze from Outer Space”.

All he wanted to be was a working man who made an honest living. Jobless, nowhere to turn and cheated by the system. Abandoned by his own family, desperate and alone he drifted. Humiliated and at the end of the road, it was here where he found the hotel. It was here that he found his sanctuary in the arms of a hooker. Until one night beauty revealed its ugly face at the “Vampire Hooker Hotel”, where you get more than you paid for.
- Directed by Nathan Hill

Every guy’s been there. Your fiancée dumps you for Jack Nicholson and you sink into a deep depression. Six months in you start to feel “The Itch” and those scantily clothed ladies on the back pages start looking nice. They’ll make you feel alive again, for the right price. Be careful you don’t catch a STD you can’t get rid of. Or even worse, one that gets rid of you! This one will give you an oozegasm.
- Directed by Edward Payson

A turkey-man is on the loose in Traumaville this Thanksgiving, wreaking havoc on its citizens for the genocide against his feathered people. With the Toxic Avenger on vacation and Sgt. Kabukiman being a drunk, who will stop this fowl movement? None other than Dolphinman! Well, maybe. Who will win when ”Dolphinman vs Turkeyman”?
- Directed by John P. Brennan

The garbage man is here and he’s one nasty Bastard. It’s time to take out the trash. Be careful where you take a dump! Be careful of the “The Flytipper”.
- Directed by Marc Coleman

When will the citizens of Tromaville learned to never trust a locally sourced product? You’re about to witness the true deadly effects of soft drinks. Especially one coming from Tromaville. Pop the top on a can of “TROMA Cola" and let the melt happen.
- Directed by Daniel Fowlie

The worst part of getting away with murder is always ”Waste Disposal”, where to put the body. You don’t want murder coming back on you.
- Directed by Katherine King

A world at war. Overbreeding and overpopulation are ruining the planet. Annihilation of its inhabitants is the recourse to rid the infestation and save the world. With so many elected fingers on the launch button of a nuclear war, it was only a matter of time. In the end the only thing left of society will be Twinkies and "The Empire of the Cockroaches".
- Directed by Marcos de Castro

A nice night out of losing your virginity to a street corner prostitute should be a sweet and memorable moment you remember for the rest of your life. That’s an easy memory to retain when you’re about to die! An innocent case of murder turns into an ”Attack”. A girl’s gotta eat.
- Directed by Michael Leo Centi

When things go wrong, don’t hold onto anger, hold onto a shotgun instead. Fall in love with ”A Shotgun, Machete & Chainsaw Kind of Romance”.
- Directed by Benji Carver & Adam Reeser

Here’s a man name Walter who was always trying to make everyone happy. But when his fellow neighbors started playing sick jokes on him he found his own unique way of getting his revenge. Now the dead will rise from their graves and get ”Revenge of the Hypno-Dead” on those who tortured Walter.
- Directed by Douglas Godino

Alexandra Rae has returned home. ”The Life of Florence Rae”, her mother has changed. Mommy’s developed a taste for raw flesh.
- Directed by Jeff Kacmarynski

On the modern day streets full of asshole Neo-Nazi wanting to Make America White Again, it’s time to fight back and fuck them with a big black cock. I think you got a couple of extra inches you can get in there. When someone’s giving you trouble call 555-CUNT and “Rose & Viktor: Lynch Mobbin” will give them trouble.
- Directed by Moses

Momma always said tv would rot your brain. I wonder what a VHS tape will do. ”Video Hell Spawn”.
- Directed by Gunnjón Gestsson

In the not so distant future evil and sin have managed to infect the entire universe. But there is hope for the future in ”Renegade Nunz from Outer Space”. The power of Busty Nuns compels you.
- Directed by Michael Leo Centi

When a slasher is chasing you through the woods, don’t panic or you’ll die from "Lock Out".
- Directed by Patryk Terelak

Check out the "Coming Attractions"…
- Directed by Paul Lynch

Here she comes. Who is it? Five years ago she was banned from the scientific community. Now after all those big boys put her through, "Empire of the Crabs"! How dare you?
- Directed by Walter Martyn Cabell

If you’re going to steal from "Hacksaw Jack" then you better scream. He’ll make you piss with fear.

Being a father means having to take tough decisions. If your home is threatened you become a protector. If someone wrongs your family you become an avenger. An avenger “For Alice”.
- Directed by Noel J. Rainford

Elvis has risen from the grave and he’s brought Bettie Page with him for eye gouging, face sitting disembowelment. See the most sinful film of the year. Featuring a pantheon of stars that look like celebrities from a less than perfect world in ”Wax House Rock”.
- Directed by Salem Kapsaski

All they wanted was a meal to remember; instead they cooked up something they were dying to forget. What’s the first rule of a big gay party? When in doubt, go retro! It began with an honest mistake and an excess of canola oil. They served a dish that would delight Satan himself. It’s in the cheese. A savage sauce, an evil entrée spiced by Satan himself. All that is Gouda, must die! “Fondue or Die”, take a cheesy dip of terror.
- Directed by John V. Knowles

When you get the worst case of “Blue Balls”, everyone is tripping. Where do you want your pizza? Stuff that crust!
- Directed by Alex Napiwocki

A TROMA anthology of melted humans. What more could you ask for? Grindsploitation 4: Meltsploitation makes no bones about it. In fact, it’s not about the bones at all. This one is all about the melted flesh of the body. A plethora of Tromaville’s cheapest coming attractions are gathered into this comical horror of shorts. These range from my personal favorite, Rose and Viktor on their latest mission for those who called 555-CUNT and the creatively funny Fondue or Die from John V Knowles.

I like that there’s no set rules for Grindsploitation with each short running its own length and telling its own story as it should. The long runtime of almost two and a half hours could've also been cut shorter, eliminating some of the overly repetitive, old school, mid-trailer reels and nearly pointless shorts that are too short like Coming Attractions and exploitation for exploitation's sake shorts like Revenge of the SNUFF. This is what the citizens of Tromaville aspire to make. Some are good, some are awful, all are TROMA!

Stick around for previews of coming attractions