Streaming Review of Lowlife
by The Headless Critic 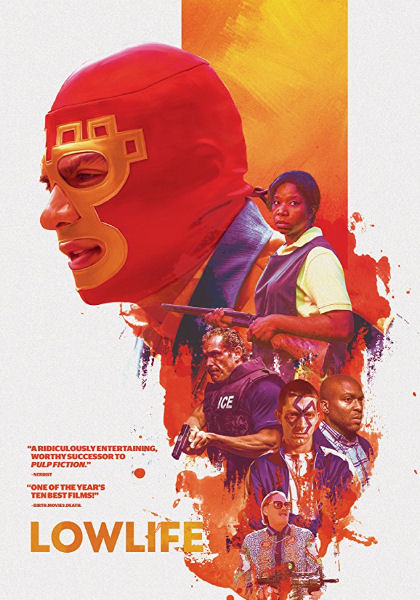 On the seedy side of Los Angeles the lives of an accountant (Shaye Ogbonna), an ex-con (Jon Oswald), a luchador (Ricardo Adam Zarate) and an immigrant smuggler (Nicki Micheaux) are about to meet. Long time criminal Teddy “Bear” Haynes (Mark Burnham) has been smuggling immigrants for sex slavery and black market organ transplants as of late. “Monsters”, “Fiends” and “Thugs” are about to take on this Lowlife. Three intertwining tales come together in a hail of gunfire and Lucha Libre. “Blessed Are The Meek”

In his first feature, director and co-writer Ryan Prows brings a Pulp Fiction-esque nonlinear tale of three intertwining stories of the seedy side of L.A. I love the off-the-wall characters including Teddy’s own accountant, a failed luchador, a woman who needs an organ transplant to save her husband’s life and a con with a swastika tattoo on his face. Who throws in a luchador in the mix, seriously? Besides the boding masked figure and non-racist with a swastika face, Mark Burnham plays the perfect lowlife to fear and face.

A fun movie, this modern day, gritty, indie, Pulp Fiction mirrored image is missing that Tarantino factor of greatness. The characters are excellent. I’ll even say they’re better defined than Tarantino’s as they leave room for the imagination to fill in the blanks while Tarantino usually leaves a literal portrayal of only what’s seen on screen. Be it an ear of the Reservoir Dogs or the ass pounding action of Pulp Fiction, Tarantino films always have that shock and awe, gotcha Grindhouse moment of Death Proof that Lowlife doesn’t quite fulfill.

The story is a little overcomplicated and not defined on screen as well as it could have been but is an excellent set-up. Excellent characters and performances from the cast make up for anything lost. On the verge of greatness, Lowlife needed just a little more life, or perhaps death to reach the pearly gates of film greatness. I’m still front row if they do a backstory on El Monstruo (Ricardo Adam Zarate), or swastika wearing Randy (Jon Oswald). A Luchador never dies.