Review of “End Trip” by The Headless Critic 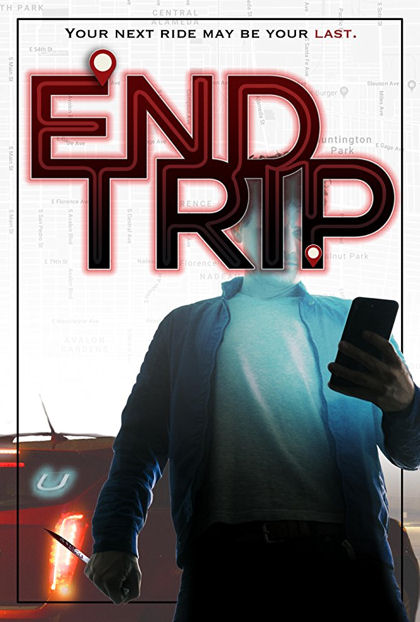 The evolution of app friendly cabs with unvetted drivers who’ll answer your call by the swipe of a finger has put many people in the back of a stranger’s car. Do you know who’s in your car? Tonight Uryde driver Brandon (Aaron Jay Rome) picked up his last Passenger (Dean J. West) of the night. One of them is going home to Brandon’s fiancée Stef (Ashley Lenz). One of them… Is insanity in the passenger’s seat or did the driver just pick up his next victim? What starts off as an unlikely friendship between driver and passenger turns into a harrowing night where death is the only thing to End Trip. “Your Next Trip May Be Your Last.”

Actor, writer and director Aaron Jay Rome uses the recent case of Uber murder to inspire his next flick. When an overly friendly URyde driver picks up an overly friendly fare the only result must be murder. URyde takes a U-turn quick and heads down a dark, one way alley there’s no coming back from. Death is only the beginning on this wild night. This one will make you delete your Uber app.

End Trip is a nicely executed, low budget thriller that utilizes limited funds well. A simple setting of a URyde car, a small cast of come and go passengers and three core characters plays well on screen looking like a larger budgeted feature. Rome keeps it simple relying on his cast and performances. The result is a nice thriller that’s well executed, hiding a limited budget. While it may not break new ground, it’s solid and a fun watch any horror fan will enjoy.