Review of “King Cohen” by The Headless Critic 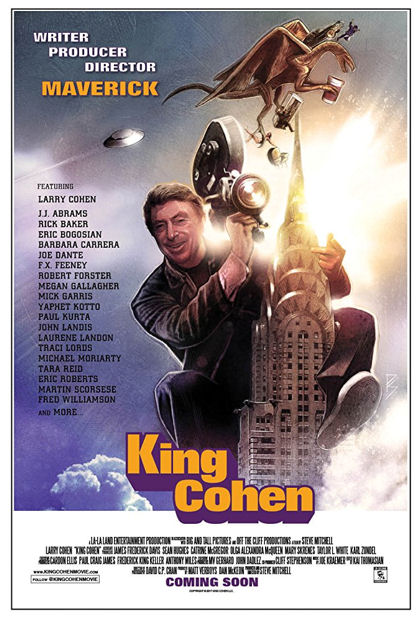 Do you know the uncredited creator of the 1960’s tv series N.Y.P.D.? How about the early day innovator of 1970’s Blaxploitation films Black Caesar and Hell up in Harlem? Have you explored the maniacal mind behind the 1980’s Maniac Cop, the 1990’s psychotic killer car, The Ambulance or the writer behind Joel Schumacher’s 2002 hit Phone Booth? Go inside the documentary of the uncrowned horror icon that brought us The Stuff for over fifty years. It’s Alive in 2018 with his creations still being revisited today. All hail Kind Cohen, “Writer, producer, director, maverick.”

The myth, the legend, the King. King Cohen is an exploration of the life and works of one of the few men in Hollywood who did it his way, Larry Cohen. Told in his own words along with those who worked closest beside him. His fifty year career in Hollywood is explored from Page to Renaissance man. Join some of Hollywood’s top directors Martin Scorsese, John Landis and J.J. Abrams who were inspired by King Cohen. You’ll also hear from the familiar faces of Larry Cohen movies including Fred Williamson, Michael Moriarty, Robert Frazier, Yaphet Kotto, Traci Lords, Tara Reid, Eric Roberts, Eric Bogosian and many more.

The writer of the cult B-Horror favorite Chopping Mall steps behind the camera for his first feature length documentary about one of Hollywood’s most legendary budgeted, B-Movie directors. It just so happens Steve Mitchell has a knack for making a documentary. Five decades of filmmaking covered in one movie, all about the man who created some of horrors most memorable films. Cohen is the director behind It’s Alive, The Stuff, A Return to Salem’s Lot, The Ambulance and so many more movies. Mitchell keeps it entertaining with a lot of stories from familiar faces and of course, King Larry Cohen.