Review of “Hereditary” by The Headless Critic

Production by: PalmStar Media
Distribution by: A24 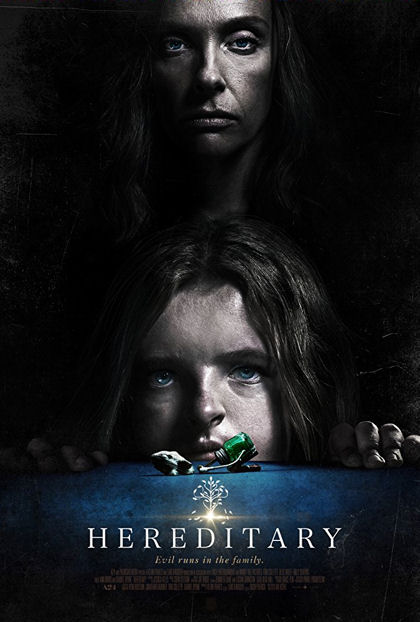 With the death of family matriarch Grandmother Leigh, the rest of the Graham family is left to follow in her footsteps whether they want to or not. Her daughter Annie (Toni Collette) is trying to hold everything together and everything is falling apart. Turning to a séance to contact the afterlife, Annie steps through blind to the other side. “Every family tree hides secrets” and this one just went to hell. “Evil runs in the family.”

Ari Aster crafts a gripping, slow motion suspense ride that will keep you guessing at every turn. Around every corner is horror imagery capturing an eerie feel in a beautiful setting and a creepy horror score. Aster shows immense talent for a first time feature filmmaker. Few movies capture the suspense Aster finds in his first outing. Even fewer movies leave my mouth hanging open in awe as this one did.

Behind the picture perfect miniature setting of Heredity there are some amazing performances. Charlie Graham (Milly Shapiro) is an enthralling character I just wanted to see more of. Toni Collette gives an Oscar worthy performance in a role that borders motherhood and insanity. The generally forgotten significant other role that’s been played by many women and a handful of men before him is really given life by Gabriel Byrne in one of the veteran actors best performances. Alex Wolff is quickly becoming a familiar face I’m happy to see in roles like Peter Graham and his co-star performance in My Friend Dahmer.

Hereditary is a suspense driven piece of artwork that tries to navigate your mind while giving you visually frightening imagery. The first half of the film is a five star masterpiece. When the film shifts focus from the captivating Charlie Graham to her mother Annie, Not even Toni Collette’s amazing performance could keep me as interested. Paced storytelling loses something in the transition. The other three Graham family members really step into their characters in the second half but the ending is what kept this one from horror greatness for me.

With no spoilers I’ll simply say Hereditary captures the suspense, eerie feel and cinematic views of 2016’s The Witch. It also has an ending that will disappoint just as many people. I personally found Hereditary far more enjoyable but was also left wanting by a huge build and a ton of potential that just didn’t pay off. An attempted but failed M. Night Shyamalan reveal ending felt more like a Scooby-Doo unmasking. Lead me by direction or shock me into disbelief, otherwise your reveal is random nothingness.