Review of “Darkness Reigns” by The Headless Critic 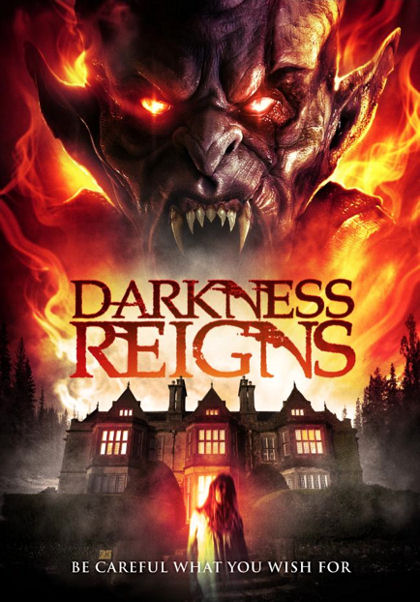 “Hello and welcome, welcome everyone to the premiere of the movie that is not only taking Hollywood by storm but the entire world, Darkness Reigns.” Darkness Reigns is a behind the scenes documentary from Daniel Whitaker (Zachary Mooren) of the upcoming independent horror film Defanatus Soul from young up and coming director Jacob Bale (James Packard).

When you do these kinds of independent horror films like Defanatus Soul distributors demand a name actor. All the Baldwin’s were busy, Slater wants too much money and they couldn’t even get Liotta to read the script. Luckily Jacob Bale just landed his number one lead in Casper Van Dien (Casper Van Dien). With the beautiful actress Rebecca Logan (Jennifer Wenger) playing opposite him, the sex appeal will sell. It helps that Rebecca’s not afraid to show her boobs. The biggest get may just be the location at this old abandoned hotel in Missouri. Sure they’ll have to travel the actors but it’s a million dollar look for absolutely nothing. Best of all, it’s supposed to be actually haunted. That should get some buzz going in the horror community.

Filmmaker Daniel Whitaker premiers his highly anticipated documentary that follows the Defantatus Soul crew as they travel on location to an abandoned hotel that’s supposedly actually haunted. What started as a behind the scenes look into independent filmmaking turns into a real life horror movie. The tragic events on the set of Defanatus Soul at first appear to be accidental but they are not. A demon has been unleashed on set and it will attempt to kill the entire cast. Someone on set has made a deal with the devil. Now darkness reigns for fame.

Darkness Reigns is actually the latest independent horror flick coming from up and coming writer and director Andrew P. Jones. It isn’t necessarily a found footage film, instead being faux documentary in the style of television’s The Office about being behind the scenes of the making of a film. Of course being a horror movie, a little more goes on than filmmaking.

The dual setting on a budget is interesting but not completely successful. I personally would have liked to have seen more of the fake film Defantatus Soul. An opportunity to have some fun scenes might’ve been missed. Budgeted effects also hurt a little but are far superior than most special effects you’ll find in similar budgeted films. There’s definitely some fun performances including Casper Van Dien playing an exaggerated, vanity filled version of himself. It also might have been the highlight of the movie.