Review of “Minutes to Midnight” by The Headless Critic

Production by: DeInstitutionalized, ForeverMaur Films, Possum on the Half Shell Productions
Distribution by: Uncork’d Entertainment 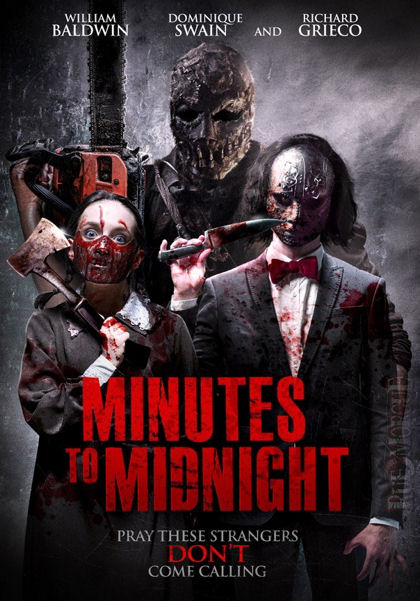 Please note that it’s Minutes to Midnight and the bringing in of a new year. Travis Crenna (John Hennigan) is searching for his missing brother Charlie (Kaiwi Lyman). His search has brought him to a town with a dark secret and a killer connection. The elders in this town know something is going on and the kids, well they’re about to play victim. A maniacal masked family is running amok and the body counts are high. Blood will drop this New Year’s Eve, will you survive another year?

Enter a burlap sack masked killer dragging a spinal cord with a spiked skull attached. The old ball and chain is taken to another level. Christopher Ray’s latest feature is a throwback slasher with all the boobs, blood and body count horror fans would expect from a traditional slasher film. Minutes to Midnight falls victim to all the horror movie clichés from extended shower scenes, illogical decision making, unrealistic characters and over the top performances. It’s as completely illogical as its choice of weapons but it also has just as much fun.

Blood will flow from the decapitated heads and passed out girls in bed in this slasher flick. A cast of twentysomething year old teens to die is accompanied by veteran actors William Baldwin, Richard Grieco as Sheriff Wyatt and a very Otis-esque view of Bill Moseley as Gimple. Throw in lolita Dominique Swain and professional wrestlers Johnny Midnight, John Hennigan and Aaron Aguilera and you have yourself a slasher movie. The addition of Hennigan gives your typical don’t go in the woods alone slasher a formidable opponent and action feel.

Christopher Ray’s Minutes to Midnight is an attempt at a picture perfect slasher movie. I’m sure it was meant to pay homage to its predecessors but in turn could have used more originality. The lead masked murderer Angus (Aaron Aguilera) seems to be wearing his costume just to look scary and his sister looks straight out of Mortal Kombat. All of that being said, sometimes it’s just good to set back and watch mindless teens die in horror films. Sophia (Sara Fletcher) wears the final girl role well, Tiffani (Jena Sims) shows off all her assets and Kyle (Phillip Andre Botello) and Vanessa (Heather Paige Cohn) prove you still can’t have sex in horror movies. Side note and spoiler alert, Phillip Andre Botello dies well. Also kudos to the casting department for making the Crenna brothers look related. I could picture an action prequel in their future.

Best of the worst of all the cast may be Richie played by actor, writer, director, producer, stuntman and annoying drunk Jared Cohn. Cohn steps fully into the shoes of that irritating role in a slasher movie where you just want to see the character die. No spoilers on Richie’s survival odds but I will say I saw him far more than I needed to. Maybe there was some brilliant thought behind this torturous satisfaction. Pros and cons, teens and killers, Minutes to Midnight is still one of the best classic slashers I’ve seen come to independent horror in a while. Slasher film faithfuls should be satisfied.