Review of “Demon Protocol” by The Headless Critic 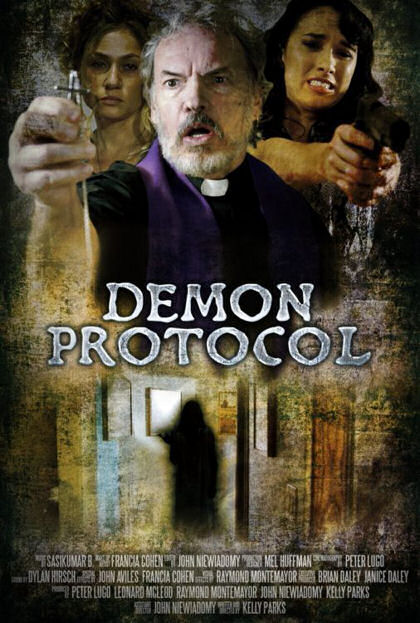 A demon has been brought forth into a young couple’s home and it’s jumping from body to body. The only way out is to send this hellspawn back to the fiery gates from which it escaped. Enter Father Prester J. Bedford (Gary Graham) and his secret order of paranormal investigators. They’re determined to find out who is possessed and rid this world from that evil forever. Demon Protocol is in effect. Either the demon is removed or everyone who could be its host must die. “Evil must be contained.”

“Demons are real. They are a great evil and they constantly try to enter our world and spread more pain and suffering and misery. Our order is sworn to sacrifice our lives rather than to have that happen.” – Father Prester J. Bedford

Five secret order paranormal investigators, two homeowners, one fallen priest and a severely haunted house. Demon Protocol doesn’t mess around jumping straight into an exorcism of house and home. A demon is just an angel who chose the wrong side and Father Prester J. Bedford and his crew of paranormal investigators are going to make sure they send it back there. The first time Father Bedford saw a ghost it scared the devil out of him but not to worry, this priest still has plenty of the devil left in him. The protocol for this exorcism comes at the end of a bullet.

“I’m going to hurt you for a thousand years and when you die that’s when I’m really going to start hurting.” - Demon

Father Bedford’s secret order includes his righthand girl Melanie (Bethany Regan), strict church follower Gregory (Scott Hopkins), Silver (Sarah Agor) who if you call her ma’am she may put a hex on you and good friends Luisa (Christina Alexandra Boyd) and tech geek David (Tim Baran) who struggles to be nice to the “normals”. They’ve all entered the home of John (Matt Bradford) and Anna Wilson (Caroline Amiguet) who were experiencing mild events Anna thought might be supernatural. John is a bit more of a skeptic. Something far worse than your friendly ghost is haunting this house.

“In your scenario, God’s a pedophile.” – John Wilson

A low budget to no budget first feature film for writer and director Kelly Parks is executed with a small cast, a single setting and simple story. It’s The Thing in biblical form, where you’re never sure who’s possessed as the small group is targeted by demonic forces. One thing I absolutely love about the film is its hour long runtime. Instead of trying to drag the story out into a more acceptable hour and a half feature, they tell their story and roll credits. In fact the only thing they did wrong in concept is the budgeted CGI. CGI on a budget is never good and their practical effects work better anyway.

It was good to see Alien Nation and Robot Jox vet Gary Graham bring a fun role to life. My favorite character however came from Matt Bradford. I usually don’t like the pretty boy roles because Hollywood is filled with such characters but Bradford’s character John Wilson gets some of the best dialogue in the film and he has fun with it. By the end of the movie his onscreen wife played by Caroline Amiguet won me over as well. In fact, there was only one performance that shall remain unnamed that wasn’t good or at least fun to watch even if it was less than realistic.

The biggest struggle for this budgeted feature may be they didn’t do enough to stand out in a sea of other independent horror films. Instead of coming up with a cool idea to sticker bomb fans into loving the creativity of, Demon Protocol puts plain black duct tape over the issue. Yes this is a symbolic analogy of the movies script to the laptop used in the film for anyone who was paying attention. Where Demon Protocol does stand out is at something that doesn’t get enough recognition, its dialogue. Parks shows a flare for writing with memorable lines you’ll find quoted throughout this review because it’s absolutely my favorite part of the film. Watch it and judge for yourself. “Are you bold enough to make a move?”