Review of “The Endless” by The Headless Critic 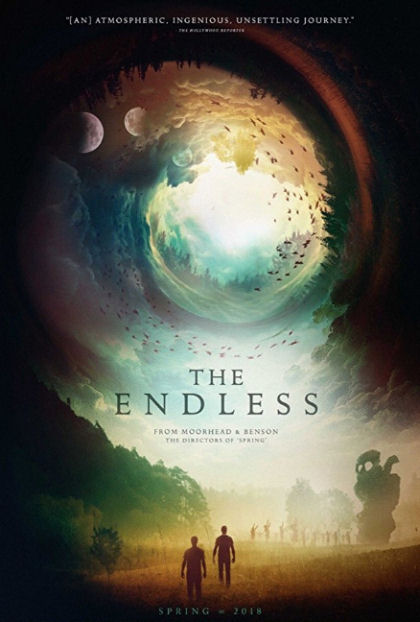 Ten years ago the Smith brothers famously escaped a death cult. Having trouble adjusting to a regular life even ten years later, Aaron Smith (Aaron Moorhead) convinces his brother Justin (Justin Benson) to return home. After finding a cryptic message on a VHS tape Aaron begins questioning if what they escaped was actually a cult and what is escape if you’re allowed to leave? Back in a commune surrounded by unexplained phenomena the Smith brothers are forced to reconsider their beliefs. Returning home can be a stressful yet is usually a loving experience. It’s no different even if your home is a commune with cult like tendencies. As this “cult” prepares for an upcoming unexplained event, the brothers try to unravel an impossible truth before their lives become permanently entangled with a cult they cannot seem to leave.

Critics seem to love this dialogue driven, suspense drama. I’m fairly certain that horror fans will not. Similarly themed to the recent theatrical release of Annihilation, where a movie clouded in mystery eyes an even more mysterious shimmer in the distance of its script. The Endless is a multi-layered story of an occult that may actually have a reason to believe.

Filmmaking basics are absolutely there. The look, sound, acting and even special effects are studio flawless and done so on a budget. The Endless also fails to build suspense, drama or even to entertain. It’s like trying to repeat that fascinating story your uncle or best friend once told but you can never quite make it as entertaining to listen to. The story is good but gets bogged down in uncertainty of direction. Writers, directors and stars Justin Benson and Aaron Moorhead know how to make a movie. Perhaps it was lost in the editing room or the lack of budget limited them but I’m just not so sure they know how to tell an entertaining story. The pace doesn’t flow, the story doesn’t progress and it doesn’t capture the viewer as a suspense driven movie always should. Currently touted as the top rated “horror” movie of 2018, watch it and judge for yourself.

WYH Interview with Justin Benson & Aaron Moorhead of
The Endless