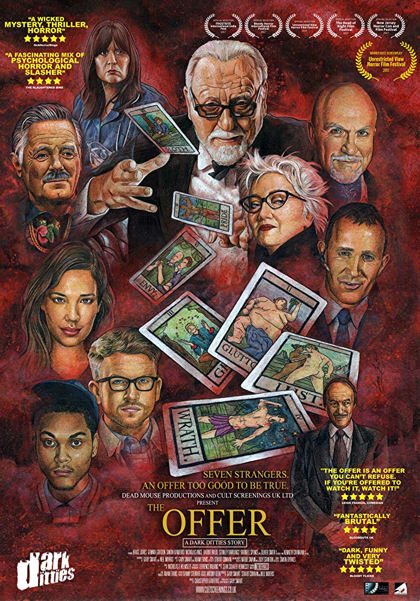 From our friends across the pond comes an anthology of sorts and shorts in horror's newest series. A Master of Horrors done in a way you will only find in the U.K. Each episode is its own near feature length film, helmed by an up and coming director and familiar cast. A country rich in a history full of horrors, join us for some of England’s Dark Ditties.

Seven strangers are brought together at a remote mansion in the English countryside. A mysterious benefactor has lured them there with the promise of an inheritance. Upon arriving to the house they learn the deadly price for the prize they seek. The Offer’ is that one of them will walk away with £10,000,000 and the other six will die. A deadly game is being played and the only way out is death.

The Cenobites are brought back together for a hell of a story. Chatterer (Nicholas Vince), Butterball (Simon Bamford), The Female Cenobite (Barbie Wilde), Channard (Kenneth Cranham) and Skinless Frank (Oliver Smith) return from hell to be tested by The Offer. They all pass. The Offer is a fun mix of Clue murder mystery and a You’re Next death at the dinner table. It’s a Rat Race full of fun over the top characters to a finish line of death. The Cenobites escape from hell and will make you laugh at their despair. You don’t have to finish your greens to leave this dinner table, but you may have to spill some blood.

Documentary filmmaker Chris Griffiths joins forces with Gary Smart to co-direct this first little ditty that probably won’t be their last. The returning four cenobites aren’t the only quadruplets making waves. Along with co-writers Neil Morris and Adam Evans, Griffiths and Smart are bringing several Dark Ditties our way. The first episode is fun bordering comedy and horror. The budget definitely shows as a few kinks are worked out in this pilot but the promise of greatness is also there. We welcome this anthology series with hopeful eyes of the horrors to come.