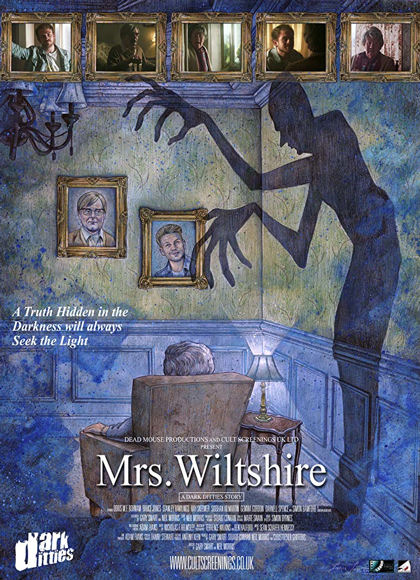 From our friends across the pond comes an anthology of sorts and shorts in horrors newest series. A Master of Horrors done in a way you will only find in the U.K. Each episode is its own near feature length film, helmed by an up and coming director and familiar cast. A country rich in a history full of horrors join us for some of England’s Dark Ditties.

The older we get, the more we let life bind us. In her final years, Mrs. Wiltshire is confined to her house alone. Her son Tony (Stanley Rawlings) has grown and moved away from home for some many years now. Her beloved husband has long since passed away but he never left the family house. Mr. Wiltshire (Bruce Jones) has stuck around even in death and his spirit won’t let his beloved widow leave their house. Mrs. Wilshire is bound by a lifelong commitment that didn’t end with, “until death do us part”. On a harrowing night a wife and mother is forced to look back on the family she tried to raise right in a heartbreaking tale of a mother’s love and the immense remorse as the sins of the father are to be laid upon the children.

The second ditty from the dark universe of Dark Ditties is helmed by returning writer Neil Morris co-writing and directing this time with Gary Smart. Several familiar faces return in front of the camera including Simon Bamford, Bruce Jones, Siobhan Kilmartin, Stanley Rawlings, Gemma Gordon and Ray Skeemer who all may turn out to be series regulars. I like the transition into this second act. A completely different tale than the blood and guts offered in The Offer, Mrs. Wilshire is brutality of the mind in a ghostly feature that binds. A similar budget, produced by the same group of talented filmmakers and their second of this anthology series separates itself finding its own identity.

Mrs. Wilshire comes in likes wrecking ball breaking down the fourth wall in this highly self-narrated short feature. Mrs. Doubtfire in horror form, I’m not sure who was behind those elderly ladies clothes but she was just as warm and inviting as Robin Williams in drag himself. An hour long short feature is largely told through narration with an excellent ending exposing the true horrors of this film and of humanity. While the runtime could have been shortened, we also might not have bonded with Mrs. Wilshire quite as well had we not sit through story time with her.

As someone who’s generally hard on Brit-flicks as well as made for telly movies I’ve been enjoying these Dark Ditties done in an unapologetic British way. So far a similar crew has managed to find their own identities for two separate stories and I look forward to seeing what they come up with next.