Review of “The First Purge” by The Headless Critic 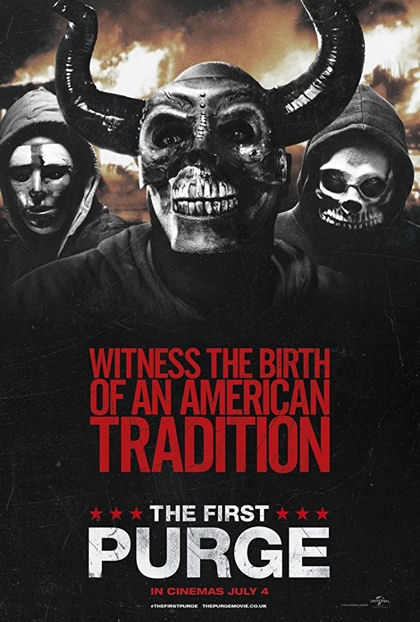 America is overpopulated. Our resources cannot sustain us. Crime is at an all-time high while the stock market hits record lows. Its citizens are tired of being lied to by both Democrats and Republicans. A new party has risen. The New Founding Fathers of America has promised to bring change and with the NFFA now in the White House we will be “A Nation Reborn”.

The new government has implemented an experimental and controversial program. As a test Staten Island, New York will be quarantined. Those who choose to stay and earn the five thousand dollar participation money will live in a lawless society for twelve hours where everything is legal including rape and murder. In a lawless Staten Island full of mercenaries, KKK members, Skeletor (Rotimi Paul) and pussy grabbing motherfuckers, the local drug lord becomes a neighborhood hero. This is The First Purge that will set the precedence for the future of America.

For the first time in four films the directorial reigns have been removed from the hands of series creator James DeMonaco being turned over to Gerard McMurray in only his second feature. While I still believe there’s a lot left to be found in the concept of a national killing day, McMurray brings more Purge than home invasion, more chaos to the Anarchy and more politics than an Election Year.

The Purge films have fallen victim to focusing on a single family while a world filled with violence is left unexplored. They have also tried to cover too much of the Purge and not focused enough on the individuals to make the viewer care. The limited Staten Island setting helps coverage of this smaller first Purge with hesitant participants who think twice before going for the kill.

Y’lan Noel steps up looking like The Black Panther of the streets of Staten Island. His gang of high priced hoodlums including Siya, Steve Harris and Mo McRae steal all interest from the intended ne’er-do-well leads played by Lex Scott Davis and Jovian Wade in their more traditional but bland good guy roles. Many talented supporting actors include Marisa Tomei, Luna Laurent Velez and Mugga help define and make you care somewhat about their limited characters.

I’ve always found the national scale variation of The Running Man, Battle Royale and The Hunger Games to be an excellent concept for film. While I’ve enjoyed participating in every Purge to date there’s never been a Purge that has met the potential of the concept. With the exception of a smoke filled killing spree with some of the fakest CGI blood I've seen and the follow up elimination of most of the characters I wanted to see more of, this may be my favorite Purge to date. While I never get exited for the bi-yearly Purge this talented cast, smaller more focused Purge and direction of Gerard McMurray would get me excited to see a second Purge.