Review of “More Blood!” by The Headless Critic 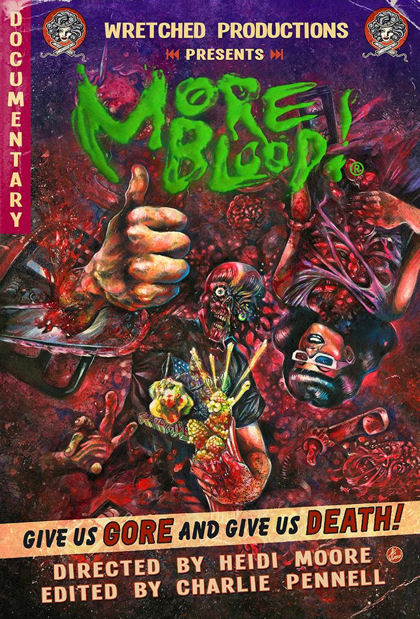 There are those who root for the heroine of the film to survive and then there are the rest of us. This is the documentary for those who want to see her caught, mutilated and killed as they laugh at her death scene. “Give us gore and give us death!” If your eyes get wide with excitement for the upcoming kill scene instead of turning your head in horror, this is the documentary for you. Go inside the minds of those who were inspired by the business to be in the business. You’ll find more mangled bodies, more severed limbs, more decapitations, more depravity and most of all, More Blood!

This documentary isn’t just an interview with gorehounds, this doc explores the minds of those who love it so much it’s become their way of life. From TROMA films co-founder Lloyd Kaufman to Chainsaw Sally herself April Monique Burril, those who were inspired by gore enough to get into the industry explain their fascination, relive some of their favorite screams, goriest scenes and the legends of childhood that set the course of their lives. From horror writers to radio hosts to the independent filmmakers who make up the business today, those who hold the bloodiest of hearts, spill theirs for your viewing pleasure.

If you’re not the one who is on the edge of their seat hoping that the final girl makes her narrow escape but instead await her death which will hopefully be in the most gruesome way possible then this movie is made for you. Big names may be limited in this independent feature but the passion is at an all-time high from Dolly Deadly director Heidi Moore's documentary debut. For those who love blood in film, there’s nothing here not to love. Relive your favorite clips and listen to your fellow gorehounds talk about their favorites in the wide world of splatter films.

Why does every horror fan want to die on film in the goriest way possible? Why not! The horror community isn’t a place of judgement, it’s a place of acceptance because in the end we all look the same when we're cut open and you're looking at our insides. So make yourself at home and lets talk blood. “There always has to be more…”

Available Now for Free on Vimeo