Review of "Friday the 13th Part 3" by The Headless Critic 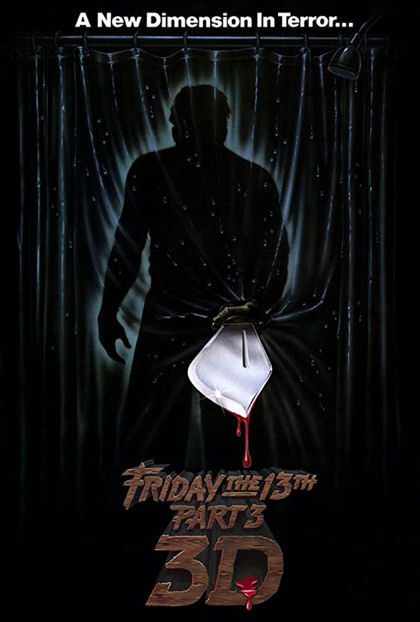 This Friday the 13th Camp Blood has finally been closed for good! Too bad those pesky teenagers never seem to learn to stay away from Crystal Lake. A group of teenage friends take to the woods near Crystal Lake. After nearly being killed in his last night of savagery, Jason Voorhees is back to murder anyone who steps near his sacred childhood lake. Join Jason in “A new dimension in terror... There's nowhere to hide. We dare you to try.” “Camp Crystal Lake’s bloody legacy” continues…

The Friday the 13th series is my favorite slasher franchise. While I know they aren’t all the best slasher movies, they hold a special place in my bloody heart. Part 3 in 3D is perhaps the most cliché slasher film in the series, all done with the occasional murder weapon, joint or breast being thrown towards you in the cheesiest of 3D. This is also the film where Jason Voorhees cemented his hockey mask murdering legacy. But how does it measure up to the rest of the series? There are an appropriately numbered thirteen keys to Friday the 13th success. In no particular order…

1. A High Body Count: The 3D kills aren't shy throwing body parts at the screen with the series highest body count at the time of its release.

2. Bad Acting: It isn’t that acting is so bad, though it is bad. The Hockett’s alone and the classic death scene of Chili (Rachel Howard) is enough to win awards. The 3D version of Friday the 13th gives us more than cheesy kill scenes and bad acting, it also creates some of the most stereotypical teens to ever die in a horror movie. Luckily it’s kept within range of an enjoyable level, providing some scary scenes where we actually want to see these stereotypes survive.

3. Camp Crystal Lake: After two films of murder happening at Camp Crystal Lake, it’s hard to explain why people keep coming back. Part 3 gets somewhat creative setting their newest set of victims in the woods around Crystal Lake. While no one in their right mind would head to the woods where people keep getting murdered, it’s close enough to satisfy series fans.

4. Kill Mom Music: The third installment pumps up the shriek of the originals sound. Taken to the next level, 3D isn’t subtle with their score.

5. Teens Dying as they Deserve: The only death better than a teenage one is a stereotypical teenage one. We get plenty of those. From 80’s gang to the Hockett family, to the 3D eye-popping finally of Rick’s (Paul Kratka) head being crushed, few make it out alive and even fewer with their sanity. Alas, we also lose one of the best characters to ever die on Friday the 13th in often imitated but never quite duplicated, Shelly (Larry Zerner). Shelly is a more heartfelt loss than the survival of our final girl Chris (Dana Kimmell). At least he dies in order for Jason Voorhees to become the man behind the hockey mask he’s become so synonymous with today.

7. Boobs: In a Joe Bob Briggs form of counting boobies, we are treated to two titty-tan-taculars on the same girl but just barely. While these healthy JUGGulars are a treat, they’re underdeveloped as far as quantity goes for a Friday the 13th film.

8. Stalking: While the first person stalking aspect is a little less in 3D, it’s still there. We’re also given the ultimate hallucination of Jason peering out at you from the house you thought you killed him in, then busting out the front door to get you.

9. Machete: Oh yes! Meat cleavers, knitting needles and fireplace pokers don’t get all the glory. Though the machete only has a few kills, they’re big ones. From the classic throat slit to cutting someone in half while they're doing a handstand and finally being hacked to death off camera, multiple times all by your favorite weapon of course, a machete.

10. Eccentric Deaths: If hacking a human body in half while doing a handstand isn’t eccentric enough for you, death by knitting needles, a speargun to the eye, an eye-popping head crush and impalement with a hot fireplace poker should win you over. Favorite kill comes at the hands of Andy (Jeffrey Rogers) who was literally walking on his hands as he’s cut in half.

11. Even More Eccentric Body Reveals: Though final girl Chris finds most of the bodies, it’s Chili who leaves a lasting impression. The actresses memorable performance of realizing everyone in the house is dead just before she dies is a thing of Friday the 13th legend.

12. A Nemesis: Not many survive an onslaught by a Voorhees. Tommy Jarvis wasn’t the only one to not make it out with his sanity. Chris (Dana Kimmell) is the most beautiful of all the girls at Crystal Lake this year. Those are always the hardest ones to kill.

13. A Killer Voorhees: A legend finds his look in the 3D installment of the Friday the 13th series. The first man to wear the mask may have wore it best. Richard Brooker is the original man to wear the look we've come to know as Jason Voorhees and I belive I liked him best in the role. Tall but believable, alive and not a zombie.

So how does 3D tally up for a Friday the 13th movie? There’s a build to the body count. Acting isn’t good but outside of Tommy Jarvis we’re given perhaps the most memorable Friday the 13th character. We don’t veer too far from Crystal Lake. The score is turned up a notch. The age of our victims is just right. It’s a more conservative Friday film for sex, blood and boobs but we finally get to see some eccentricities in our deaths. The body reveals leave something to be desired unless that desire is bad acting. We finally get the Jason Voorhees that’s become a pop horror culture phenomenon. Cheesy 3D deaths or not, Part three is one of the best in the series.